Why does Professor Hulk wear glasses?

(other than when he poses for pictures with fans and is impersonating Hulk in the Battle of New York).

But why does he need glasses? Are we saying that Hulk has always been visually impaired?

Looking at the image below of Professor Hulk in Endgame, the strength of his glasses is very low, as there is no visible displacement of his temple as seen through the lenses. This means that (a) the glasses are purely ornamental, meant to provide a less frightening countenance, or (b) they are very low-strength reading glasses. The fact that he doesn't need the glasses for most things is evidenced from the funeral picture in the answer by TheLethalCarrot, where he doesn't wear them. My guess is that (a) is the right answer; with the history of violent Hulk, Banner would take steps to create a different, more intellectual image. 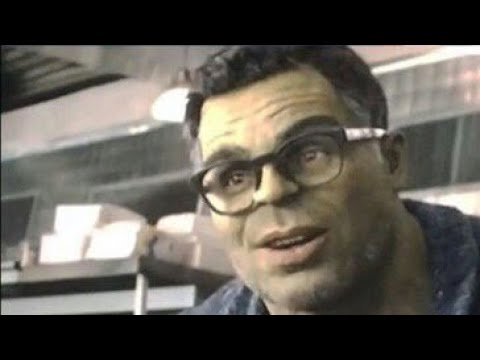 In Avengers: Endgame after the time skip Professor Hulk explains to those that meet him in the cafe that he merged Banner and Hulk together to get the best of both, Banner's intellect and Hulk's strength and powers. One of these powers is super healing as we see in Thor: Ragnarok when Banner jumps onto the Rainbow Bridge and is all but killed in the process until Hulk comes out and they are both fine again.

However, in Avengers: Endgame we see that Professor Hulk is damaged by perfoming

and is still seen to be damaged by it at the end of the movie.

Ignoring that this might have been because it was the

He needs glasses due to the fact that his consciousness is that of Bruce Banner's. Bruce Banner is visually impaired, therefore the Hulk is.

Not the answer you're looking for? Browse other questions tagged marvel marvel-cinematic-universe the-incredible-hulk avengers-endgame or ask your own question.

10
In Endgame, why didn't the Hulk's arm regenerate?

51
How does The Incredible Hulk change mass?
3
Why does the Red Hulk stay as the Red Hulk?
10
Why does Red Hulk lose his mustache when powering up?
34
Why aren't we getting Hulk sequels in the MCU?
26
What was SHIELD doing during the Battle of New York?
22
Why is the Hulk so angry?
14
Why is Jefferson Davis-Morales working for PDNY (instead of NYPD)?
1
How does time work in “Avengers: Endgame”?
22
In this drawing of the Avengers, who's the guy on the right?