90s novel. Star Wars ripoff where people of faith wear blue stones around their necks which glow when near other blue stones/other believers

This novel was bought in a Christian bookstore in the 90s. A paperback, in American English. Cover was light colors, mostly white. I think there was a spaceship on the cover. Found in my parents basement on a visit as a "new book" to me at the time - I had voraciously read everything they had before 1990. My mom always bought from the same bookstore, now closed.

In the novel there was an evil galactic empire, with a small plucky group of people who (mostly passively) resisted its rule. These stand-ins for persecuted Christians wore blue stones as jewelry around their necks. When they were in close proximity to another stone (and therefore another believer), both stones would glow. Later these believers found a planet to hide on with lots of these stones. They discovered that the stones could be used as spaceship fuel, better or at least faster than that used by the evil empire, enabling them to escape when they were eventually discovered.

The final confrontation was against a Darth-Vader-like big bad that fought with a glowing red rod against the blue-stone-powered weapon of the main character. The big bad lost when he accidentally hit the dark altar that was the source of his demonic power, causing said power to turn on him.

I saw it as a star wars ripoff at the time for 3 main reasons. 1. It was an implied sprawling space empire with no reference to earth or to any real-world country or nationality. 2. Overwhelmingly powerful evil empire versus small good group of rebels. 3. The lightsaber-like fight at the end. Hopeful glowing blue against darkly throbbing red.

I suspect it was the author's only novel, and published under a generally Christian book imprint like Zondervan or Revell.

The book you are describing is Captive Planet, by Gregory J. Smith. It's a Christian YA science fiction book published by Bethany House in the 1980s. (There is a sequel, called Operation Master Planet.) I first read the book in the early 1990s, then forgot the title, and spent about 20 years trying to rediscover it. 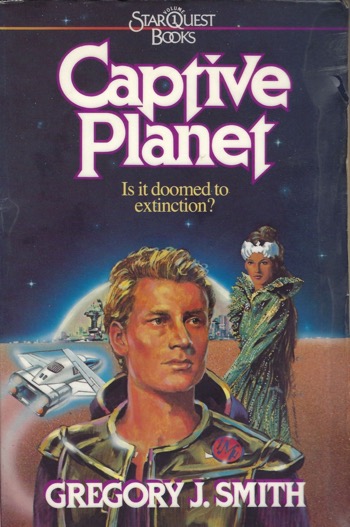 Your memory does not fail you--you got it right on every major plot point. And it's totally filled with things that are almost-but-not-quite Star Wars. Check out this detailed plot summary.

The evil Dominion rules the galaxy. Its cruel leader Kurdon enforces his iron will through a cadre of elite Doomen, soldiers who possess psychic powers to read minds and communicate telepathically among themselves. A space fleet capable of destroying planets helps, too.

The heroes find a planet to hide on:

Lam offers to take the Tsuians to a hidden sanctuary planet often used by space pirates who are looking to lay low and evade the Dominion.

The good guys have blue glowing stones that turn out to be great for powering spaceships:

The Le-in's glowing rocks are monobarite stones, or m-stones for short. The planet has huge deposits of them. Lam and the Tsuians study the m-stones and discover that the stones amplify any sort of energy applied to them. Fitted to their spaceships in place of redlyn rods, the m-stones provide incredible acceleration, firepower, and even a glowing blue energy shield. It's an awesome secret weapon. Cool.

There's a definite Christian allegory. Or rather, a religion that is Christian in all but name.

And it turns out the Le-in also worship the Source and the Power. But their theology goes on step further: instead of a god in two persons, they worship a trinity: the Source, the Power, and the Friend. Lam cries out to god for help, and God gives him a vision: the Friend appears to him, speaks to him, reveals Himself. Lam believes.

And yes, a light-saber battle at the end.

There is a showdown. Lam ends up fighting Kurdon in single combat at the foot of Kurdon's throne--Lam and his glowing blue m-stone enhanced cane vs. Kurdon and his glowing red rod. (Totally not blue lightsaber vs. red lightsaber. Totally not.) Lam is about to lose, but Kurdon accidentally smashes his own throne, breaking it and releasing the evil power contained within. (It's Satan, I think.) At that very moment, all Doomen everywhere cease to function. They were reanimated corpses all along, controlled by the satanic power that Kurdon served.

3
Short novel with two men and a woman on a spaceship; one of the men abuses the woman
14
Identifying story set in a high-fantasy world implied to be post-apocalyptic
19
Looking for a book about the moon being a spaceship with an AI
6
Scifi series in one book which had people discovering Martian energy technology and further space adventures
5
Can't remember fantasy novel with magic and technology mixed, search for elemental shards/crystals
11
Book: Dystopian Future; Memory Saved on Crystals; Paid Torture for Fun
12
Identifying a particular science fiction novel
9
Fantasy novel where characters have gemstones implanted in their bodies. Female baddie is trying to 'harvest' them
15
Novel featuring a baseball bat and a talking duck