I must have read this one about twenty years ago in my early/pre-teens, and can now remember little more than that it involved wooden sailing ships set on steel runners to skate across huge ice sheets.

Possibly in the same book (or confused from another read around the same time) was the idea of the planet being buried under a mile of snow - this was eventually discovered to be due to a long carbon nanotube getting detached from somewhere and ending up one end in the ocean and one in the upper atmosphere, thus siphoning the world's oceans into snow. I'm leaning towards this being a separate book.

story-identification books
Share
Improve this question
edited May 4 '19 at 10:14

A few years ago I picked up a paperback copy of Ice Prophet by William R. Forstchen. First published by Del Rey in 1983. It was Volume One of a trilogy. I haven't read the later installments, so I can't swear to the bit about the carbon nanotube. (If such a tube was explicitly mentioned in the first volume, I don't recall that much detail now. I do recall that it was stated that human technology had somehow triggered the Ice Age which the book's characters were living in.) 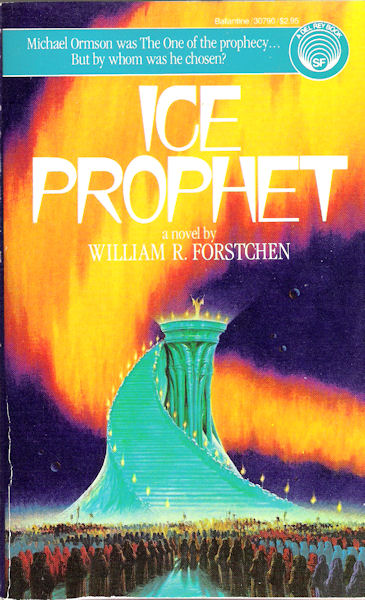 As you indicated, this story is set a couple of thousand years in our future, after the world has been suffering from an extreme Ice Age for most of that time, and our technology has regressed sharply. Fleets of ships do, in fact, have steel runners to help them basically skate on the ice as they sail out to do war with the fleets of rival powers.

This definitely was a standard operating procedure in the world of Ice Prophet. I remember the author going into detail about how operating what was basically a one-person battering ram (or "torpedo" if you prefer, although it lacked any explosive warhead) was frankly considered something of a suicide mission. I believe many, if not all, of the pilots of such things were convicted criminals who were guaranteed a full pardon and their freedom if they volunteered for this duty, did their best on the battlefield, and survived to be retrieved by a friendly vessel later on. (As you might guess, many failed to meet that last requirement.) In other words, if they had gotten the sharp end of the battering ram aimed on a collision course with an enemy ship, and then detached themselves after they figured it was too late for the target to adjust its sails to let it completely avoid the giant spear that was now coasting toward the ship over a field of ice. (There may have been some sort of quota system, such as: "You don't get your freedom after the first time you do this, but you do get it after the fifth consecutive time," or something like that -- I'm not sure of the details.)

To talk a little bit about the general plot: The title character of this first book is young Michael Ormson, who is the nephew of a powerful man in the Cornathian Church (one of three great rival churches, all loosely modeled on the medieval Roman Catholic Church, near as I could tell). He gradually becomes disillusioned about corruption and political rivalries and so forth within the church in which he was trained to make a career, and -- somewhat to his own surprise -- ends up as the popular leader of a radical new political and religious movement. At the end of the first book, he is riding high, having recently won some battles and thereby inspiring even more people to believe that he is, in fact, "The One," a long-awaited man of destiny who has been sent by God to lead people into a new Golden Age, or something to that effect. (In other words, a Prophet.)

Toward the end of the book, he also has a very frank talk with a clergyman who admits that the three great churches, each of which dominates a different region, are run by men who secretly conspire to maintain a balance of power by keeping the various nations at war with one another instead of working together to find ways to improve technology and so forth. The theological disputes between the churches are just excuses to keep fighting, in other words. The secret agenda went something along these lines: "Our ancient records say that this Ice Age began because our ancestors, a few thousand years ago, tampered with the environment and caused great harm. Now it is the sacred duty of the various churches to make sure Man does not regain all that high-powered technology until the entire species has become much wiser and better able to handle such responsibilities." (I think that most of the rank-and-file clergymen were unaware of all this, honestly believing that "my church preaches God's own truth, and those rival denominations are just deluded heretics who deserve to be conquered by us true believers! It will be for their own good!")

As you might guess, Michael Ormson was a wee bit skeptical about the suggestion that all this warfare and deception would ever lead to a time when people were "just naturally ready" to reclaim advanced technology, and that the leaders of the churches, in some future generation, would then suddenly decide to give up most of the power they currently had. Instead, Michael was going to try to accelerate the process of shaking things up and building a new and improved civilization right now that would make life easier for the average man or woman.

(Since I never finished the series, I don't know just how well he did, in the long run, at changing the world for the better. But I certainly understood his frustration with the status quo.)

The first part of your question sounds like Icerigger by Alan Dean Foster - four humans are stranded on the planet TranKiKi after a botched kidnap attempt. To escape they have to travel halfway round the planet to a human settlement. Aided by the indigenous Tran, they travel on a large wooden iceship, running on skatelike runners. There are also two sequels - Mission to Moulokin and The Deluge Drivers.

Cover for Mission to Moulokin: 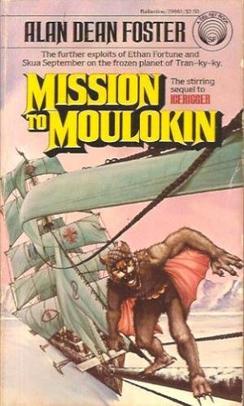 This goes back a ways (to 1969, in fact) but "The Ice Schooner" is what occurred to me immediately. To be honest, I don't remember the details of the book - just the arresting image of a frozen Earth with large ships sailing over the ice.

By the way, the vessels in question are square-riggers, not schooners. Moorcock actually addresses this in the book. The fore-and-aft rig hadn't been successful, but people liked the name "schooner", so it got generally applied.

Jumping though a number of other links suggested, I believe it may have been the Ice Prophet trilogy by William R Forstchen.

Many thanks for the suggestions, it sounds like I've found at least one new series to read though this!

5
fantasy book about a boy drowning in ice and waking up in a fantasy world
9
Fantasy series about a world with ice ships and lots of religious overtones
8
Sci-Fi fantasy book about boy with powers?
7
Fantasy or sci-fi book involving cats and their philosophy
3
Sci-fi book featuring insectoid aliens that had biological ships
9
Sci-fi/Fantasy book about bear postman on a planet of bears
8
Sci-fi book series with a spaceship below the ice in Antarctica