Superman watches as the Earth is disassembled by aliens

The Earth is being disassembled by aliens, and even Superman can't stop them. The aliens' ships mark ground with long red lines before cutting, and the pieces are taken away, no one knows where. No one knows what happens to the people living there, either. There is a striking illustration of the Earth opened up like a diagram in a geology textbook with the core and mantle showing, as Superman flies in space wondering what's happening and what he can do about it. (Incidentally, I would love to see a copy of this illustration again.)

I'm not sure what happens next, but evidently he allows himself to be taken along with a slice of planet in order to find out where it's all going. To his surprise and relief, he finds the missing people lolling in a resort. They're taking great care of us, he is told. The aliens, who have been careful to say nothing up till now (for reasons that make no sense whatsoever other than to increase dramatic tension), now explain that one of their spacecraft leaked some extremely dangerous fuel onto Earth while passing by, and in order to decontaminate the planet they have to take it apart and process it. Earth is put back together and not a teacup is out of place.

I read this in a comic book published in English, presumably "Superman" comics, in the 1960s.

DC published a story that is similar to this, but it is not a Superman story.

In nr 38 of Tales of the Unexpected (1956) the second story was called Dissection of planet Earth. It was about an inventor called Rod, living in the far future of 2026. Rod and his friend Clay had just tested his latest invention, a spray that makes everything super magnetic, when they notice two beams coming from nearby spaceships. The beams cut into the Earth and the ships flies off with a part. 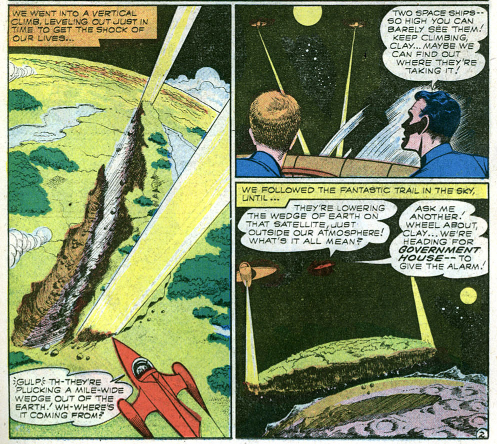 They contacted the president of Earth, but he didn't seem to care. Soon it happen again, and the heroes could clearly see the aliens had marked the parts they will cut with red. 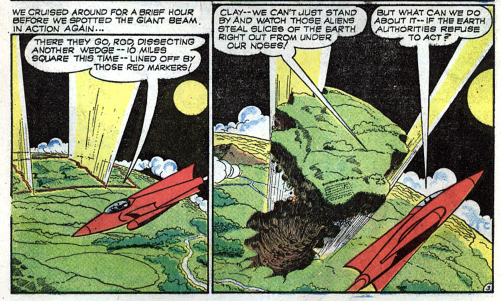 Rod start to wonder what will be left of Earth if they continue. 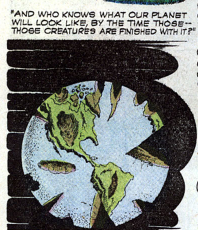 When they see the president talk in secret with one of the aliens Rod decides to take the battle to them. He sprays the aliens ship with the magnetic spray and expect that it will magnetically attract some iron comets that will destroy them. The aliens responded by teleportering Rod and Clay on board their ship and the president explained that the aliens were just try to clean up some chemicals that they accidentally spilled into our atmosphere. 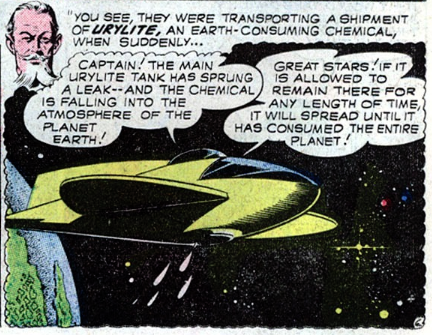 The chemical is neutralized by ultraviolet rays, but since Earth atmosphere stops that from reaching the ground they decided to pick up affected parts and clean them in space before returning them.

Rod realized that bombing the aliens with comets was not a good thing to do. To avoid a disaster he sprays the comets with his magnetic spray too, but of a negative charge. The comets were reflected away and the aliens could finish their job.

This story match your description in several ways.

There are also some differences.

10
If Superman died on Earth, would his body decompose?
17
What happened to the rocket that brought Superman to Earth?
14
How Long Did it Take Superman to get to the Earth?
31
How heavy is Superman on Earth?
8
Want to identify a science fiction short story that takes place during WW1 or WW2
8
Hunger games style alien book
2
What are the differences between the pre-crisis Superman and the post-crisis Superman?
3
Identifying a Superman Elseworlds comic where the Kyptonians take over Earth
15
Story about future special forces fighting nano-tech aliens