In Return of the Jedi when the Rebel group of Luke, Han and co. are captured by the Ewoks, Luke tells C-3P0 to act as the 'God' figure the Ewoks believe him to be.

Why doesn't Luke use the Jedi mind trick to secure the group's release? Does this trick even work on Ewoks?

Luke seems to be wary of directly interposing himself into the situation (which presumably included trying Jedi mind tricks) to try to influence a group of individuals when he doesn't really know the power-dynamics at play.

“Careful, Chewie,” Han cautioned from across the square. “He must be the head honcho.” “No,” Threepio corrected, “actually I believe he’s their Medicine Man.”
Luke was about to intervene, then decided to wait. It would be better if this serious little community came to its own conclusions about them, in its own way. The Ewoks seemed curiously grounded for a people so airborne.

Return of the Jedi: Official Novelisation

Instead he opts for a more forthright solution (but one that falls short of outright violence), by playing on their superstitious credulity.

As to the specific question of whether Ewoks can be 'tricked', the Star Wars RPG (Saga Edition) Core rulebook indicates that Ewoks are certainly smart enough to be tricked (they have an above class-3 intellect) and are insufficiently strong-willed to win a defensive roll against an experienced Jedi Master if they want to use their 'affect mind' skill on an individual Ewok.

That being said, it's also made clear that affecting 10+ individuals that you can't directly communicate with is next to impossible, so in this particular circumstance Luke might have been able to scare the Ewoks with a Force affect, but he wouldn't have been able to trick them into releasing him willingly. 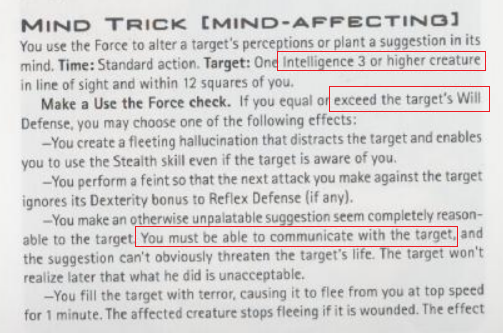 32
Were the Ewoks already planning an offensive or revolt?
8
Did the Ewoks continue to think C-3PO was a god?
10
Why didn't the Ewoks attempt to kill Leia?
2
Can a Jedi 'mind trick' cause the target to do the opposite to what a Jedi wants?
7
Does the Jedi mind trick only work on sentient beings?
30
How often do ewoks eat sentients?
20
Why was the colour of Luke's lightsaber changed from blue to green between the trailer and the release of Return of the Jedi?
80
Did Luke play any significant role in “Return of the Jedi?”
10
Do any expanded universe works acknowledge the high risk taken by the protagonists at the beginning of “Return of the Jedi?”
10
Why can't Jedi tell who can be mind tricked?