Cartoon about a girl and her friends and two teams

It's about a teenage girl and her friends, I think part of a team. I remember something about team A or team B, daily combating magic and fantasy/magical creatures. If I remember correctly she is studying magic from her grandma and has a dragon as another mentor. I feel like I have the name on the tip of my tongue but can't remember it no matter what, and I have tried Googling everything I can think of. I think it is European, like French or Italian, and I believe her name is the title of the series.

This is likely Tara Duncan, a French animated show that debuted in 2010 on Disney XD, and is based on the eponymous novel series. 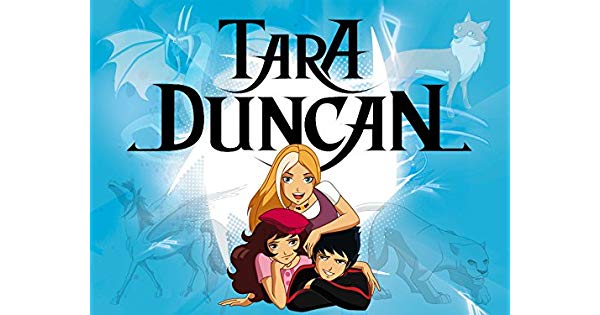 Tara is blonde with navy blue eyes, white wick as her ancestors and extraordinary powers (because she was genetically modified by a crazy dragon) . She has a rebellious spirit and a great need for freedom, as well as a tempestuous personality, which she makes it known quickly by charring those who are the object of her wrath.

Tara Duncan discovers that she is a powerful "spellbinder," possessing magic powers. She was raised on Earth as an ordinary teenager by her grandmother and initially knew nothing of magic. Her adventures begin when she is 12 and take her to the planet Other World and beyond. Magic is present in those worlds, as are evil wizards, giants, "vampyrs," dwarves, elves, sirens, and two-headed business administrators.

Tara's companions in her adventures include her fellow Earthling Fabrice and the friends she makes on OtherWorld: a half-elf called Robin M'angil, the licensed thief in training Caliban Dal Salan, a shapeshifting princess Gloria Daavil nicknamed "Sparrow", and a short-tempered but warm-hearted female dwarf named Fafnir.

The school has an "Alpha Team" and a "Beta Team".

Is it the Life and Times of Juniper Lee. Titular character Juniper Lee learns magic from her grandmother. She has another mentor who is a pug, not a dragon.

Not the answer you're looking for? Browse other questions tagged story-identification magic cartoon magical-creatures or ask your own question.

14
Fantasy Book with a ring linked to a dragon
26
Books about dragons and war from a cat-loving author
7
Romance book about a shapeshifting unicorn and a shapeshifting dragon
10
Animated show with character who has a stone that summons creatures
9
2000's cartoon where a six-fingered pianist gets his extra finger(s?) removed for the girl he likes
7
80s cartoon about a boy stranded on a planet
9
Cartoon TV show aired in UK where creatures would be supersized as enemies, fought by a group of teens/young adults
4
Anime/cartoon about two kids trying to depetrify all humans
15
What cartoon features a giant origami crane (and possibly a flying bed) brought to life?
2
Cartoon about 2 guys (one named Sam) and a girl