How did Emma end up with slime covering her face?

So, I recently found this image of Jean Grey saving Emma. Apparently, the slime forming into words was part of a creative run called Nuff Said where multiple Marvel books had to do an issue without dialogue. However, when trying to research this issue, I can't find how Emma got slimed to begin with. Was this something to do with Toad? Here's a link to the image in question: https://i1.wp.com/1.bp.blogspot.com/-nd_-3OEqqNs/Txije5sVFoI/AAAAAAAAAEg/TNd7J5S390c/s1600/New+X-Men+-+121+-+%2527Nuff+Said+-+Silence+-+Psychic+Rescue+in+Progress+-+20.jpg?resize=525%2C825

Charles Xavier's mind lies imprisoned in the comatose body of Cassandra Nova. The two psychic connoisseurs, Jean and Emma, embark on a telepathic journey into Cassandra's consciousness to rescue him. Down the metaphoric stairway of Cassandra's mind and facing a vast ocean, lies a suspiciously fortified tower. Phoenix builds a bridge to cross the great divide, but suddenly the tower's defenses collapse Jean's structure. Emma shows no inclination of wanting to assist her but fortunately Jean manages to swim the remaining distance. Inside the tower, the Professor hunches over, chained down into an oozing pit, and holding up his immensely swollen head. Jean delves deeper into the metaphysical objects around her; soon witnessing the remarkable creation of two twin babies. Still in the womb, one of the twins awakens and begins strangling its sibling. But the other fights back with a psionic blast; that has the consequential effect of their pregnant mother falling down a flight of stairs. Phoenix then comes closer to Charles, releasing and setting him down on the beach side, opposite the tower. Exiting the silent room, Jean reveals to the others that the Professor tried to kill his twin sister while they were both in the womb.

So, long story short, this was just a matter of Emma getting caught in one of the traps in the defenses of Cassandra's mind.

The preceding panel from here: 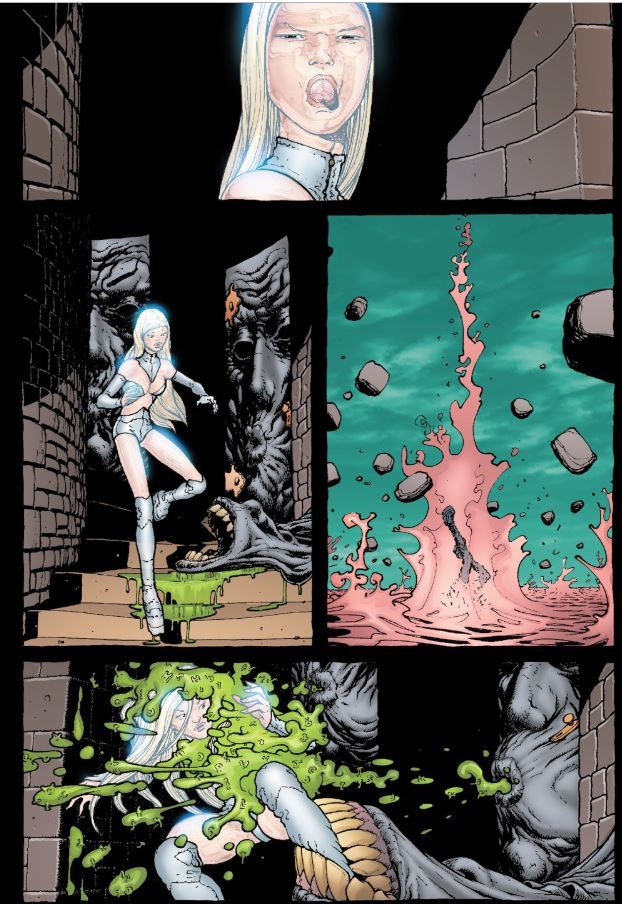 This image appears in the issue New X-Men Vol 1 121 where Jean Grey and Emma Frost go into the consciousness of Cassandra Nova Xavier, twin of Charles Xavier. Her body also holds his consciousness at this point.

The whole thing is very weird and nothing has to make sense because this isn't the real world. The slime comes from this face door thing:

18
How do the mutant levels correlate with the mutant classifications?
8
How did Magneto successfully kill Sebastian Shaw?
25
How can Kitty Pryde achieve time travel with her phasing abilities?
4
Where did Mystique learn her combat skills?
4
Can Kitty Pryde phase through material attached to her (e.g. Toad's slime)
21
Did Captain America ever come face-to-face with Hitler?
28
How does Shadowcat keep her clothes on?
4
How did Kraglin end up with Yondu Udonta's prototype fin?
15
How did the power source of Mar-Vell's aircraft end up with her?