has Corax always been this strong?

I am just listening to the Corax Horus Heresy book, a selection of Novellas and short stories. There is a scene in Soulforge where Corax takes on 3 Defilers, 2 he destroys himself and the 3rd is destroyed by, I think a Thunderhawk, firing 3 missiles and pouring bolter fire into it.

Just before Corax enters the fight he sees as one defiler annihilates a squad of Raven Guard.

Now while the fight is not straightforward (Corax destroys the first easily, is then grabbed by the second, smashed into the ground several times and finally manages to get himself free before obliterating the Defiler) this feat does seem amazing even for a Primarch.

Is Corax known for being one of the strongest primarchs? I always thought his ability came from his speed and stealth. Do any of the source materials (including stat lines and game rules) suggest that Corax is capable of this kind of feat?

now referring to the encounter, i would say that corax is weaker there than before the Horus heresy, sustaining wounds that normally would have healed but they didn't because he felt guilty about the whole raptor ordeal and the dropsite massacre. Corax always was a great fighter, he was able to quickly defeat Lorgar and would have killed him during the dropsite massacre if not for the intervention of Kondrad Curze so yeah disregarding a individuals natural growth during the centuries of fighting i would say he was always more or less as strong as. 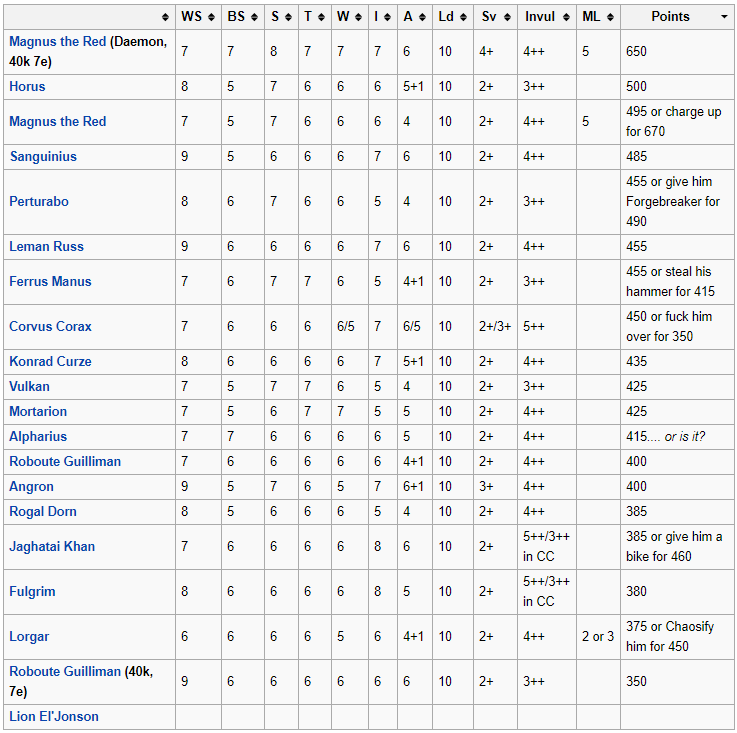 In the "First Heretic" novel which partially takes place during the Drop Site Massacre Corax manages to smash his way through the possessed marines to his traitorous brother Lorgar and gets very close to killing him. Only the intervention of Konrad Curze saved Lorgar and still, Corax managed to fight his way out of this uneven duel.

As for his relative strength in comparison to other primarchs, you can check the results of the simulations on the 1d4Chan - out of 16 opponents (no data for Lion El'Jonson) he loses to 10 and ties with 4 - that is unless he is lucky as he is more of an assassin rather than a brawler.

8
Who has killed the most primarchs?
4
Has the "history" of Tallarn changed?
4
Did Lorgar always know Horus would be Warmaster?
2
Have the destruction of Olympia and Nostramo been shown in the heresy books?
4
Which Primarch has been shown to be the strongest in battle?
4
Has the Thousand Sons involvement in the Heresy been ret-conned?
2
Did the Emperor always have the correct legion in system when meeting a new Primarch?
3
Did Corax really try to rescue Vulkan?
10
Is this a reference to "Ozymandias", from Shelley?