What was the inspiration for the 'draco vulgaris'?

Is the draco vulgaris (first described in Guards! Guards! (1989) inspired by the pseudodragons found in Dungeons and Dragons?

I recently learned about them and find many similarities:

Since D&D has many versions, I face difficulties identifying when pseudodragons were first defined but they seem to be mentioned in a first version (1977).

Digging around this topic, I found the small pet dragon trope: it seems to be even older?

Does anyone have a Terry Pratchett interview or discussion about this topic?

I'd be very surprised if D&D Pseudodragons were the initial inspiration for Draco Vulgaris. As the TV Tropes page says, small pet dragons predate them in a significant way. The tropes page guesses that the Trope maker (i.e. work that popularized it) was Dragonquest by Anne McCaffrey, a 1970 work, but the also appear in A Wizard of Earthsea by Ursula Le Guin. Mr Pratchett was clearly aware of Dragonquest because he parodied the entire Dragonriders of Pern series in The Colour of Magic (thanks Sarriesfan for reminding me). It hard to imagine that given those two huge influences Mr Pratchett would give main credit for the inspiration to a fairly obscure D&D monster. Of course, as with most literary inspirations, it's likely that the creatures didn't derive from a single source.

While the notion of small dragons (or dragon-like reptiles) is certainly older than Dungeons & Dragons, I think there is actually a good reason to think that Pratchett was, at least in part, inspired by D&D. That reason is the name: Draco vulgaris. The first edition of Advanced Dungeons & Dragons had all the non-unique dragons listed in the Monster Manual given faux-Latin scientific names. 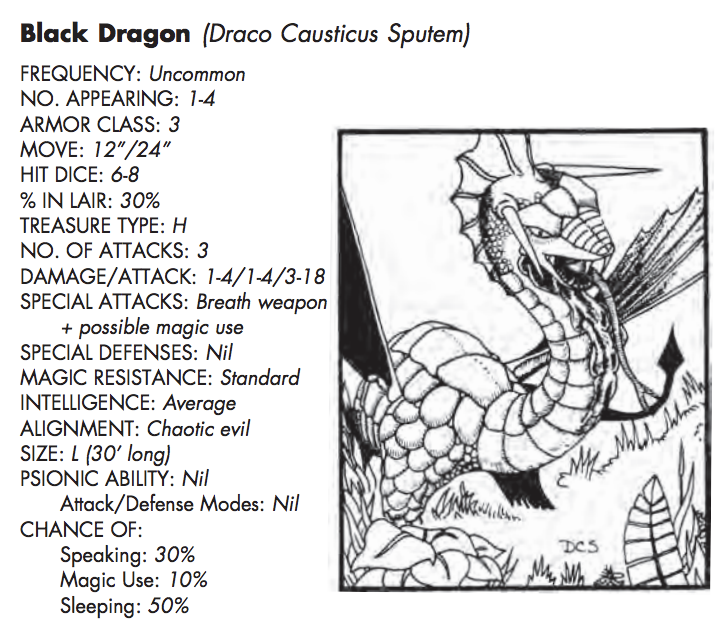 These include Draco Causticus Sputem, Draco Electricus, Draco Impudentus Gallus, Draco Orientalus Sino Dux, Draco Chlorinous Nauseous Respiratorus, and Draco Conflagratio Horriblis, among others. Later books identified the Platinum Dragon, Bahamut, as having the Latinate name Draco Paladin. The name Draco vulgaris (which is dog Latin for "common dragon") follows this pattern. Since the made-up dragon names were an innovation of first edition AD&D, I suspect that Pratchett had the D&D dragons in mind as he was writing Guards! Guards!

Not the answer you're looking for? Browse other questions tagged dragons discworld terry-pratchett dungeons-and-dragons or ask your own question.

75
What order should I be reading the Discworld books in?
21
What are the sources of the imagery for the Discworld resting on the backs of the four elephants and Great A'tuin?
38
What line from the Discworld books did Neil Gaiman put into Sandman?
10
What is Dios doing on the island?
25
What was Lobsang's gift to Lu-Tze, if anything?
32
Looking for a Discworld book a quote is from (and the full quote)
5
Was the creature guarding the camp in the Dungeons and Dragons movie a beholder?
7
Was the trident (named Wave) in the AD&D "White Plume Mountain" adventure a reference to anything specific?
58
Did Terry Pratchett ever explain the inspiration behind the Luggage?