I have this very vague memory of watching some live action series or movie (can't remember which), where these kids got sucked into a video game/computer. I remember that there was this strange blue CG sprite and that at one point a boy spelled "HELP" on the floor with sticks inside the game so the outside would notice.

I must have seen it around 2005–6, but my teacher showed it to me, so it may have been older. So I think it may have been educational in some way, but I can't remember how. I also remember a kid using a crayon and paper to figure out what some stone said but that may be from something else. I am aware this is incredibly vague — but it was definitely live action.

Bearing in mind that your teacher showed it to you, I reckoned it might have been an educational programme, and googled the BBC's "Look and Read" series to try to find a match:

"Zzaap and the Word Master" was originally broadcast in 2001. Wikipedia's synopsis reads:

Josie and Peter get transported into an educational computer game at their school. Once inside they discover that the game is being controlled by the evil Victor Virus who is intent on finding a way to take over the world. The children, assisted in the real world by Simon and Frances, must stop Virus by completing the various levels of the game.

You mention "a strange blue CGI-like sprite". There's an image at https://www.amazon.co.uk/zzaap-Word-Master-Look-Read/dp/0563541075 which does indeed show such a sprite interacting with two of the children.

Also, to quote your original post - "I also remember a kid using a crayon and paper to figure out what some stone said" - This sort of thing would happen quite often in Look and Read.

Could it possibly be Spy Kids 3D: Game Over? 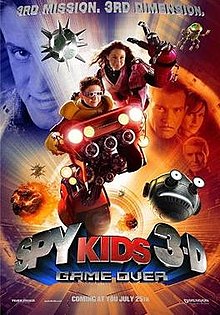 Carmen's caught in a virtual reality game designed by the Kids' new nemesis, the Toymaker. It's up to Juni to save his sister, and ultimately the world.

It features children being pulled into a video game. It was released in 2003 so it's from around the same time. Additionally, it's live action with CGI components and the players trapped in the game are aided by the outside world. However, this film doesn't, to my recollection, feature a blue sprite, the spelling of 'help' with sticks, or the crayon rubbing.

The only strictly matching point is that it's a live action series involving kids pulled into a video game, and it's around the right timeframe, but could it be the 2003 Australian series, Pirate Islands? 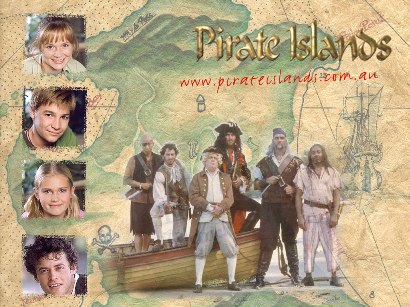 Kate Redding, a sister of Nicholas and Sarah, is playing a new computer game called Pirate Islands, which has been created by her father. After Sarah tampers with the computer scanner, lightning strikes the house, and the scanner goes wild, zapping the three siblings inside the computer game. After teleporting inside the game, Kate meets Mars, the main character of the video game. Blackheart, the pirate captain, takes the siblings aboard the pirate ship and threatens to walk them off the plank, Mars climbs aboard and cuts the rope, causes the sails to fall against the pirates, the siblings escape and attempt to find their scanner, only to be cornered by the pirates and drop it into Blackheart's grasp, who uses it unknowingly to zap his crew-mate, causing him to pixelate and melt.

Kate discovers that users are transported between islands in the game through icons, after jumping inside, she ends up on castaway island only to find that Carmen, the second in command, has stolen all the items from Kate's bedroom. The pirates arrive and chase the gang off the island, causing Sarah to trip against a tree trunk which triggers a secret entrance inside the tree, which contains stairways up towards a hidden treehouse, the gang store their few belongings and decide to call this place their new home.

Nothing in the plot on Wikipedia mentions spelling out "help" with sticks, or getting a rubbing from a stone to discover engravings, but it seems like it would be within the genre.

Found by searching for tv series kids pulled into videogame -cartoon, which brought me to TV series about children ending up in father's computer game on this site.

Most likely a cartoon called Zixx.

Zixx and Flanngo need to find a way into the Keep, a trans-dimensional antimatter field (a cyber dimension resembling a video game), the last legacy of the ancient Gaanth race, the leaders of the Network (reminiscent of Tron). The difference is that death is permanent if they die in the keep. Reluctantly accepting the help of earthlings, Adam and Griff, the four need to move fast and finish level one of the Keep, to do so they will need to recover the six fragments of a crystal that are scattered throughout the level. When the crystal is whole and combined with the crystal base, it shows the map to the three neuropods buried deep within the level that, when solved, show the path to the next level. They must accomplish all of this before Onccalon's henchman Deeth does.

Is it possibly Adventures in Dinosaur City?

The story involves a trio of teenagers, named Timmy (Omri Katz), Jamie (Tiffanie Poston), and Mick (Shawn Hoffman), who enjoy watching their favorite TV show which features anthropomorphic dinosaurs. Wanting to watch it on a better screen, Timmy, the youngest of the three, suggests that they try watching it on his father's screen in his laboratory. The moment they turn it on, a vortex sucks the three into the TV screen, and into their favorite show.

Upon entering the new world, the trio comes across a flightless Dimorphodon named Forry (Rob Sherwood). Reluctant, his knowledge of Dinosaur City proves useful as he guides the three to Tar Town where they join up with a Tyrannosaurus named Rex (Patrick Labyorteaux) and a Triceratops named Tops (David Jolliffe), two dinosaur freedom fighters willing to ignite a revolution against the villain, Mr. Big (Patrick Labyorteaux) and his caveman henchmen "The Rockies".

10
Sci-fi show where a father, and later his son, are sucked into a computer, and transported into various historic moments
3
TV series about children ending up in father's computer game
3
What is the movie/show where a boy and a girl enter a video game?

11
Shown in elementary school; sci-fi mini-series with kids about a book or reading. Tonal notes involved
9
80's/90's Live-action Sci-fi TV series: group of kids find an alien
6
Kids TV show combining live action and animation, kids fighting monsters after entering a photo booth
8
Kids movie where kids are turned into gnomes
4
2000s sci-fi cartoon show with a group of friends sucked into a console/TV to another dimension
4
Live-action TV show/movie where kids go into the world of a video game world which looks a lot like World of Warcraft