In Star Trek, prior to Discovery, has a ship been shown dropping out of warp from the outside?

I've noticed Star Trek: Discovery has, on several occasions, used a neat visual effect to show a ship dropping "out of warp", from the outside. Something stationary is shown (like a planet) while the ship "stretches in" from somewhere off camera.

I can't recall a similar effect ever being used in the previous Star Trek TV series or movies. I feel like it was always mentioned as happening off-screen ("The Klingons dropped out of warp, sir"), or, was shown from the ship's point of view, internally.

It might have happened in the Kelvin-universe movies, as I'm less familiar with them. Even so, I'd also be curious to know what's the first example of it being shown in the prime-universe.

Has this effect ever been used in Star Trek prior to Star Trek: Discovery? If so, when was its first use?

How about the Picard maneuver which involved going into and out of warp in a fraction of a second? 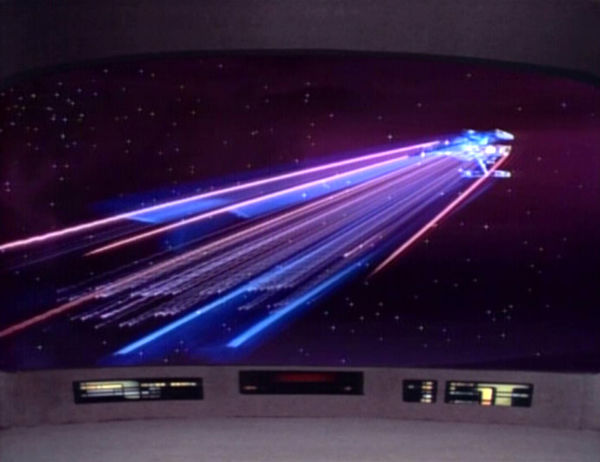 This was depicted in the season one TNG episode, "The Battle".

This effect has been used heavily in Star Trek throughout the years. Here's a clip from Enterprise where it's used

1: this is the same example that @Valorum mentioned in comments, but I hadn't seen his comment yet when I posted this answer.

I'm sure there are more examples. These are just the ones I could find so far that hadn't been mentioned yet.

49
Why would any Federation starship (such as the Enterprise) have any spouses or youth onboard?
13
In which Voyager episode did the ship go to warp despite having sustained damage?
11
Has viewscreen-to-viewscreen communication with potentially hostile ships ever provided a tactical advantage?
22
Why does USS Discovery's saucer section spin?
8
Why did some vessels in the 23rd Century use unique assignment patches?
2
In Star Trek Discovery "Into the Forest I Go" is the Klingon ship arriving at Pahvo cloaked?
18
Have we ever seen a captured ship incorporated permanently in the enemy's fleet?