Story about a first contact with alien race via radio signals

A researcher discovers and decodes a radio signal from an alien race. She eventually sends a response, and over time, using set theory, logic, and math, humans and the aliens figure out how to communicate. The aliens send a series of questions about ethics and morality. After the researcher answers, they send plans for a biological printer/incubator that can construct individuals of their species, so they can experience what it is like to be a different species.

The round trip time for each radio message is several decades. This is a core issue in the book. At the time this is going on, medicine and life-extension techniques are just starting to reach the "effective immortality point" (life expectancy increasing by more than one year for each year that passes), which is necessary for a single individual to maintain a conversation over light years. In the book, the alien sending the messages only wants to talk to the one specific researcher.

The book references the essay "What is it like to be a bat?" and the science fiction film "Contact".

One of the questions the aliens ask (paraphrased):

You and your friend come across an object while traveling together. It has no value and isn't useful to either of you. You can't leave it behind and you can't share it. Which of you should keep it? 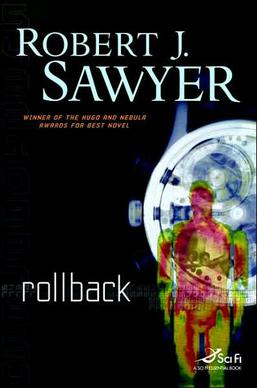 The novel focuses around Don Halifax and his wife of sixty years, Sarah, an astronomer who translated the first transmission sent from an extraterrestrial source to Earth 38 years prior to the opening of the story. Sarah, now 87, is tasked to decode the second message sent from the unknown alien race - if she can live long enough to do so. A wealthy industrial billionaire, Cody McGavin, offers to put up billions of dollars to perform a "rollback" on not only Sarah, but her husband of 60 years, Don. This process, which reverts a person's body to a much younger state, is successfully performed on Don, but fails to work with Sarah. This leaves Sarah gradually creeping toward death while Don's life begins anew. Much of the story focuses on Don as he discovers the advantages and disadvantages of being young again, with periodic flashbacks to when Sarah translated the first alien message.

The reference to the Nagel essay is in chapter 37 when Sarah has just received the message containing the alien DNA and the blueprint for the artificial womb and the incubator:

The Mozo, still looking at pages of text, said at once, "Thomas Nagel."

The reference to the film Contact is at the start of Chapter 15:

Like most astronomers, Sarah fondly remembered the movie Contact, based on Carl Sagan’s novel of the same name. Indeed, she argued it was one of the few cases where the movie was actually better than the overlong book. She hadn’t seen it for decades, but a reference to it in one of the news stories about the attempts to decrypt the response from Sigma Draconis had brought it to mind. With pleasant anticipation, she sat down next to Don on the couch to watch it on Wednesday night. Slowly but surely, she was getting used to his newly youthful appearance, but one of the reasons she felt like watching a movie was that she’d be doing something with Don in which they’d be sitting side by side and not really looking at each other.

26
Humans travel to make first contact with aliens. Aliens have caste system. Both races encounter a superintelligence
58
Novel about a spacefaring mission trying to reestablish contact with Earth
10
Title of 2 books about 2 different alien species who are fighting for earth
3
Odd telescope allows sending messages into the past
7
Title of a book I read in the 1980s, human scientists transformed into aliens in a world-zoo
33
A story about a derelict ship orbiting a planet with spider-like creatures
17
Short Story About an AI Learning in a Child's Body
8
Science Fiction Short Story Regarding First Contact with Alien Race that Values Emotions