How well-known was Aerys Targaryen's madness outside the noble class?

We all know Aerys II was mad, there's no disputing that. We often see the testimonies from the nobles however like Catelyn Stark:

"Aerys . . ." Catelyn could taste bile at the back of her throat. The story was so hideous she suspected it had to be true. "Aerys was mad, the whole realm knew it, but if you would have me believe you slew him to avenge Brandon Stark . . ."
A Clash of Kings - Catelyn VII

Or Brienne of Tarth:

Brienne was still awaiting his answer. Jaime said, "You are not old enough to have known Aerys Targaryen . . ."

She would not hear it. "Aerys was mad and cruel, no one has ever denied that. He was still king, crowned and anointed. And you had sworn to protect him."
A Storm of Swords - Jaime II

But there's scarce information about how well were the people aware of their King's mental health. In fact we only see evidence to the contrary i.e. the Smallfolk loved their King like they loved his ancestors.

"It's a sin and a shame," an old man hissed. "When the old king was still alive, he'd not have stood for this."

"King Aerys, gods grace him," the old man said, too loudly. A guard came sauntering over to shut them up. The old man lost both his teeth, and there was no more talk that night.
A Clash of Kings - Arya VI

And Cersei Lannister's memories of the Great Tourney of Casterly Rock:

She was ten when she finally saw her prince in the flesh, at the tourney her lord father had thrown to welcome King Aerys to the west. Viewing stands had been raised beneath the walls of Lannisport, and the cheers of the smallfolk had echoed off Casterly Rock like rolling thunder. They cheered Father twice as loudly as they cheered the king, the queen recalled, but only half as loudly as they cheered Prince Rhaegar.
A Feast for Crows - Cersei V

Admittedly Aerys seems least popular when compared to Tywin or Rhaegar but people still cheered for their King.

Even the lower echelons of faith stood by the King if Prince Oberyn can be believed:

"All that," said Prince Oberyn, "and your father's fall as well. Lord Tywin had made himself greater than King Aerys, I heard one begging brother preach, but only a god is meant to stand above a king. You were his curse, a punishment sent by the gods to teach him that he was no better than any other man."

Notice that there's no mention of his madness or general unfitness to sit the throne, only that he was King by grace of gods and no one could ever stand higher than him.

Then we have what Nimble Dick Crabb, a commoner and an honest thief, told Brienne of Tarth how his people felt about Robert and Targaryens:

"And what did Crackbones do when Aegon and his sisters came?" Brienne asked him.

"He was dead. M'lady must know that." Crabb gave her a sideways look. "Aegon sent his sister up to Crackclaw, that Visenya. The lords had heard o' Harren's end. Being no fools, they laid their swords at her feet. The queen took them as her own men, and said they'd owe no fealty to Maidenpool, Crab Isle, or Duskendale. Don't stop them bloody Celtigars from sending men to t' eastern shore to collect his taxes. If he sends enough, a few come back to him . . . elsewise, we bow only to our own lords, and the king. The true king, not Robert and his ilk." He spat. "There was Crabbs and Brunes and Boggses with Prince Rhaegar on the Trident, and in the Kingsguard too. A Hardy, a Cave, a Pyne, and three Crabbs, Clement and Rupert and Clarence the Short. Six foot tall, he was, but short compared to the real Ser Clarence. We're all good dragon men, up Crackclaw way."
A Feast for Crows - Brienne IV

Here Nimble Dick isn't talking about Aerys specifically but given his age and context, he is clearly referring to either Aerys or Viserys as the true King and is proud of the fact that they are all Targaryen Loyalists where he comes from. But then again, we have Brienne's own words that she considered Aerys the true King personally, not Robert.

With rare direct testimonies concluded, if we try to judge perception of the people by the state of government, that also goes in Aerys' favour. For example:

Of course we know all of that was because Tywin Lannister was governing the realm as Aerys' Hand but the commonfolk didn't really know that (Although there were rumours that the Hand ruled the King - Which surprisingly made the common folk hate Tywin rather than Aerys because once again, only gods may rule the King). Not to mention, the Mad King was clever enough to make sure that whenever anything went wrong, Tywin got the blame and whenever things went right, he got the credit. He even actively sabotaged Tywin's reputation to boost his own i.e. he randomly raised tarrifs and duties on ports in Tywin's name, only to reduce them back graciously when the merchants, Lords and commonfolks would come begging an audience with the King to control his Hand. These people would naturally go home and talk about the hand's wickedness and the King's kindness. A most accomplished mummer, the mad King was.

Over all it seems like while the noble class and the Maesters all agree that Aerys II was a monster, the smallfolk do not appear to share their views.

How much did the public know about the extent of his madness and cruelty? I know there's nothing in the books about that since they are written from POV of nobles, have the author or his associates commented on that?

King Aerys attended the Tourney at Harrenhal and it was the first time he left the Red Keep in years. His appearance drew even more people in and so there would have been lots of common folk there. In the below quotes it makes it obvious that his madness would be clear for all to see. As the king would be seen in public and probably seen acting like that gossip would spread to how mad he was there. Even if commoners watching the tourney didn't see, serving girls and servants in the background would most likely have done.

Such events were widely popular with the commons, however, and when Lord Merryweather warned Aerys that forbidding the tournament would only serve to make him even more unpopular, the king chose another course and announced his intention to attend. It would mark the first time that Aerys II had left the safety of the Red Keep since the Defiance of Duskendale. No doubt His Grace reasoned that his enemies would not dare conspire against him under his very nose. Grand Maester Pycelle tells us that Aerys hoped that his presence at such a grand event would help him win back the love of his people.

If that was indeed the king's intent, it was a grievous miscalculation. Whilst his attendance made the Harrenhal tourney even grander and more prestigious than it already was, drawing lords and knights from every corner of the realm, many of those who came were shocked and appalled when they saw what had become of their monarch. His long yellow fingernails, tangled beard, and ropes of unwashed, matted hair made the extent of the king's madness plain to all. Nor was his behavior that of a sane man, for Aerys could go from mirth to melancholy in the blink of an eye, and many of the accounts written of Harrenhal speak of his hysterical laughter, long silences, bouts of weeping, and sudden rages.

On top of that Aerys made a public show of annointing Jaime into the Kingsguard at the start of the Tourney so they probably would have seen him there.

At the tourney's opening ceremonies, King Aerys made a great public show of Ser Jaime Lannister's investiture as a Sworn Brother of his Kingsguard. The young knight said his vows before the royal pavilion, kneeling on the green grass in his white armor as half the lords of the realm looked on. When Ser Gerold Hightower raised him up and clasped his white cloak about his shoulders, a roar went up from the crowd, for Ser Jaime was much admired for his courage, gallantry, and prowess with a sword, especially in the westerlands.

The depiction of the Tourney in The World of Ice and Fire shows that Aerys would be at least somewhat visible to those watching it. 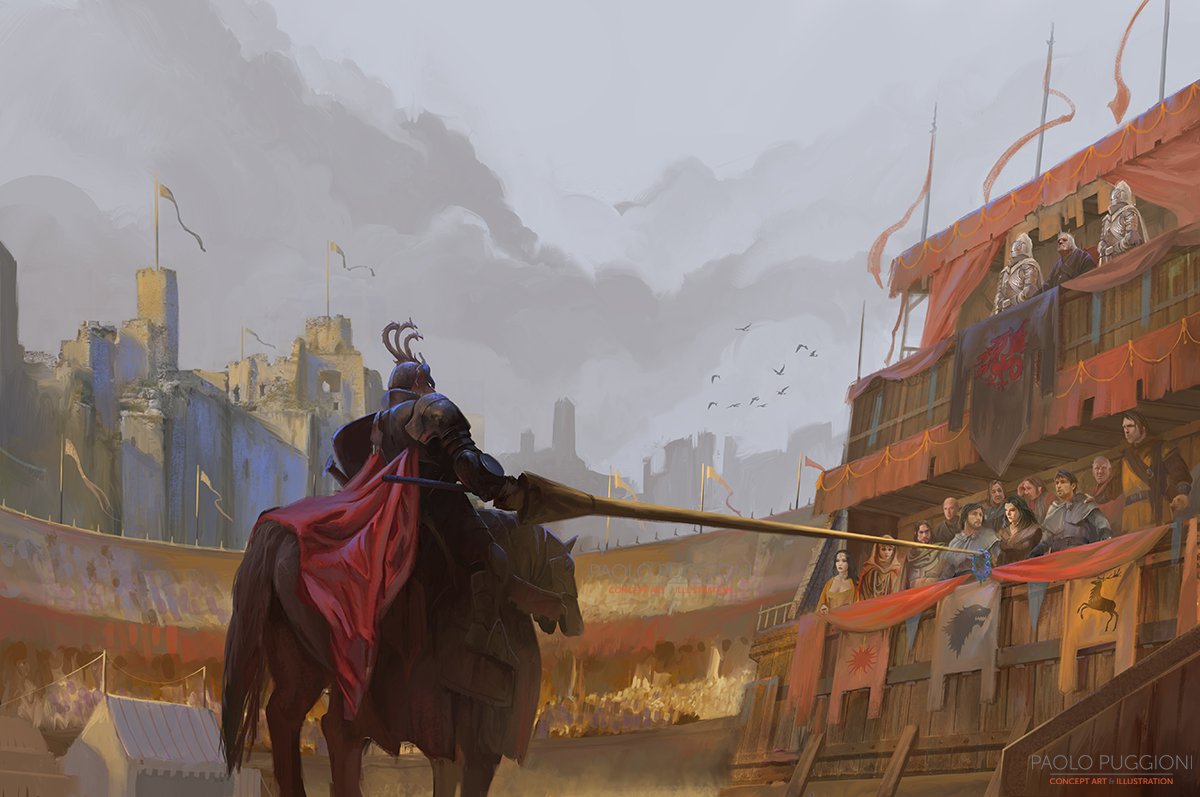 With all this in mind I think it's safe to say the gossip would have spread like wildfire and that the King's madness would be well known even if not believed.

19
Did Aerys II Targaryen father Tyrion?
22
Why do people of the realm hate Jaime Lannister?
40
Are the Lannister siblings really who they say they are?
13
Why did Stannis join the rebellion?
6
Did Tywin know why Jaime killed Aerys Targaryen? And how did he feel about the event?
4
When was Robert Baratheon's coronation?
19
Why didn't Jaime Lannister tell everyone about Aerys's wildfire plans?
5
Why did Prince Doran not join Renly Baratheon?
2
To what degree does Daenerys admit her house had to be relieved of the Iron Throne due to her father the Mad King?
8
Why didn't Aerys II or Rhaegar let the world know that Rhaegar married Lyanna?