The setting of the story is about that any human being might be controlled/possessed at any time by unknown forces. Society as a whole seems to have adapted, there are even laws governing such incidents. Nevertheless, life is quite gruesome. I remember one scene in which it is described that people are killed by jumping to their deaths (into oversized meat grinders? I am not quite sure) while possessed.

The protagonist is a man who raped or molested a woman while possessed. Nobody believes him though, since such a thing never happened before. Although innocent, he is found guilty and becomes a "Liar" mark, maybe as tattoo or branding.

After some adventures he discovers that the possessions are in fact a technical feat by some group (or whatever).

Possible duplicate of this question: Headdress to control another person. Sounds very much like Frederik Pohl's A Plague of Pythons. Human beings possessed by unknown forces at any time. The protagonist is branded with an H for hoaxer (not an L for Liar), because it happens at a place that is supposed safe from the possession. I don't remember a meat grinder being in the book, but it has been a while. 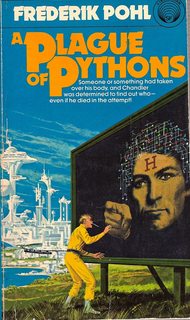