Is it confirmed anywhere which of the Raith sisters appears in Wild Card?

Other than Lara Raith that is.

A total of three (non-deceased that is) other Raith sisters appear in the Dresden Files Wild Card comics, none actually referred to by-name in comic and them all being seen together here.

After the training session, one at least (at the back by the tree-filled window, hair down) isn't seen again in the story - seemingly being kept out of things as her sisters and brother handled the business that was going on.

I don't have any exact guesses on who she may be, other than perhaps one of the younger members of the household.

I do have guesses about two at least, specifically them being -

Natalia Raith is described by Harry Dresden as taller and more masculine than her sister Elisa Raith. She wore a man's shirt with only one button closed. Her hair was long and messy from having just gotten up out of bed with the Naagloshii attack. She carried an exotic looking axe with the edge having an unusual concave shape.

Elisa is described by Harry Dresden as wearing nothing but weapons and silver body piercings on one eyebrow, one nostril, her lower lip and her nipples. She had dark, close-cropped hair except for the dark bangs that fell to cover one of her eyes. She carried a pair of wavy swords like Lara's.

As the above descriptions seem to go with the appearances of the sisters in Wild Card: 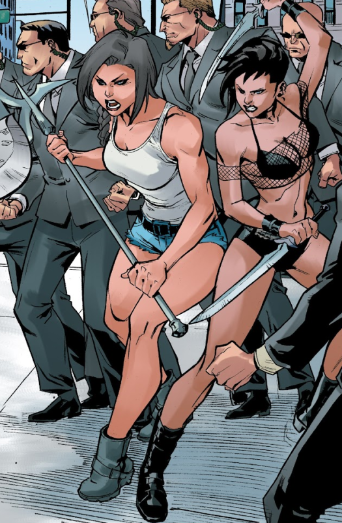 Although, on their wiki pages, neither of them are noted to have appeared in the comic, which is in-canon in at least "broad strokes" - Jim writing the outlines of DF comics and also referencing them sometimes in books - so you would have thought, if this were them, it would be noted.

Hence, what I'm wanting to know is:

While no names are given in comic, is there anywhere that does canonically confirm/specify who these sisters appearing in "Wild Card" are, that I have simply missed? As opposed to just assuming/making guesses?

If there isn't, I'll just go with my former guesses - but if there is I would prefer to know for certain.

Browse other questions tagged the-dresden-files or ask your own question.

2
In which book and chapter does Harry Dresden use Lasciel to see in the dark?
4
Why there is so little healing magic in Dresden Files?
6
Who is Oberon in the Dresden-verse?
4
In the Dresdenverse, which vampires have souls?