Has a three-eyed Raven ever ruled Westeros?

The three-eyed Raven knows a lot. In particular, this knowledge could be used to exploit others. As Varys once implied, information is power.

If that is the case, did the Raven become the rules because of the blackmailing power of the information it has?

It has been brought to my attention that Bran will be voted king.

Is there any evidence that he rose to such power because of such blackmailing?

This answer is based mostly on the books, because:

People with the abilities of the Three-Eyed Raven (or Three-Eyed Crow as he is referred to in the books) are properly referred to as Greenseers. There is no evidence such a being has ever sat the Iron Throne, and there is a great deal of lore suggesting that none ever has.

The Greensight ability originated with the Children of the Forest. They were driven north of the Wall by either the First men or the Andals long before the Targaryens conquered Westeros and established the Iron Throne. The ability persists among the people of the North and the Neck, such as Bran Stark and (in the books) Jojen Reed, because these peoples have ancient Westerosi ancestry going back to the First Men. I believe that their Greensight is evidence suggesting that their ancestors also interbred with the Children of the Forest.

The only other character known to be a Greenseer is Brynden Rivers, previously known as Lord Bloodraven. This is the character known in the show as the Three-Eyed Raven. He was Hand of the King and master of spies a hundred years before the show begins, but never a King in his own right. He had a reputation as a sorcerer, and it was widely believed that he had magical abilities to see what was happening throughout the Kingdom. I don't know if it's ever confirmed that he used Greensight during this time or whether that ability only manifested after he went north of the Wall and met the Children of the Forest. While he is not from the North, being the bastard child of King Aegon IV Targaryen and Melissa Blackwood, he does carry the blood of the First Men, since his mother's family was driven from the North by the Starks thousands of years ago.

While he was never a King, he is certainly an example of a powerful character whose greatest weapon was information (although his bow was nothing to scoff at either). He rose to power after slaying his half-brother, Daemon Blackfyre, during the First Blackfyre Rebellion. It is unclear to what extent, if any, his uncanny abilities were key to this victory.

The only houses to sit the Iron Throne are Targaryen, Baratheon (briefly), and Lannister (currently). There is no evidence of any of these lineages having Greensight, as none of them are descended from the Children of the Forest.

So it seems very likely that if

does become King. Contrary to ApproachingDarknessFish's answer, he does not sit on the Iron Throne because it has been destroyed prior to his becoming king. Instead, he sits in his wheelchair and he is pushed around by Podrick, as shown below: 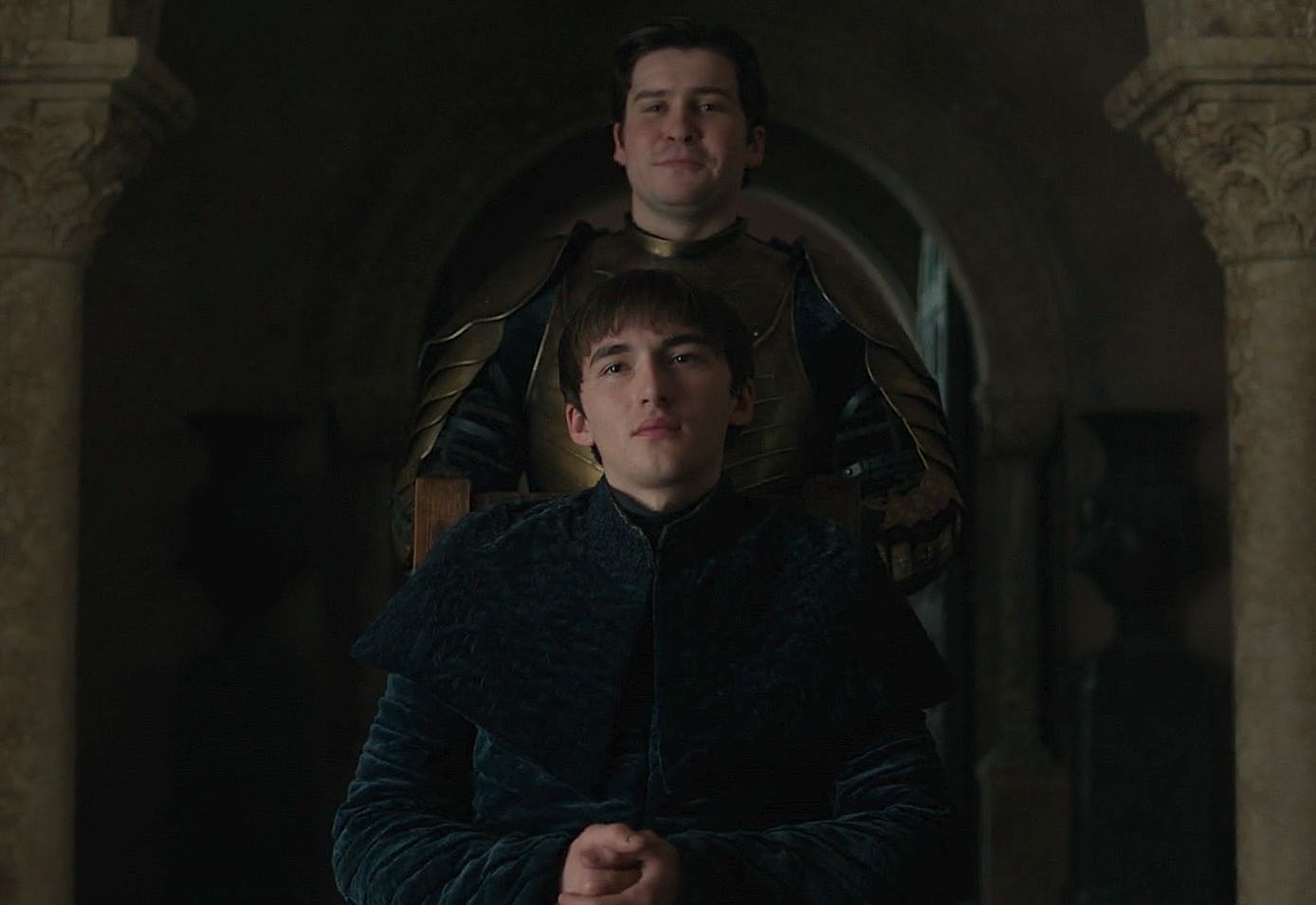 17
What is the meaning of Bran Stark's dreams with a three-eyed raven?
8
Has Essos ever invaded or attacked Westeros?
8
Why is Brynden Rivers called the three-eyed crow?
30
What's the big deal with the Tyrells controlling Westeros?
1
What knowledge do the people of Westeros have about Daenerys and her dragons?
6
Did the three eyed raven know this? (S6E05)
23
What did the Three-eyed raven say to this character?
14
Have other men been the Three-Eyed Raven in the past?
62
Why isn't everyone flabbergasted about Bran's "gift"?
8
Did the Three-Eyed Raven have a long-standing plan relating to Westeros?