1950s or earlier book with electrical currents living on Pluto

My first sci-fi book I ever read was in the early 1950's in Europe (probably 1952) and it had 10 stories about a different form of life on every planet, including the sun. All I can really remember is that the life on the sun was organized plasma streams on the sun's outer layers, and the life on Pluto was permanent electrical currents within lakes of liquid helium on the planet's surface. Very imaginative at the time.

That is Flight into Space edited by Don Wollheim and published in 1950 by Frederick Fell.

It's subtitled "Great Science-Fiction Stories of Interplanetary Travel" and just as you describe, has a story for the Sun, all nine planets, the Moon and the asteroids. The Sun creatures (in Sunward by Stanton A. Coblentz) are as you said, but the Plutonians (The Rape of the Solar System by Leslie F. Stone) were not -- in that story Pluto was located closer to the Sun until a war with Mars hurtled it outwards. 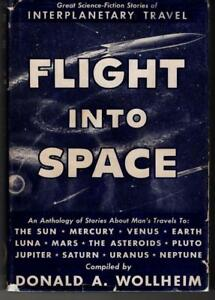 16
Short story or novella about an extrasolar planet that develops intelligence, sends comet-like probes towards Earth?

14
Book about people living in giant hotels
7
Book about kids killing vampire living in their hotel?
4
Pre-1950s book about a man trying to get past a machine with long arms
7
Sci Fi book 90s or earlier - Societies on Earth living in domes
4
Book with super powered kids with electrical powers
12
70s (or earlier) sci fi book, addictive soft drinks
4
Kids/YA chapter book with invisible spaceship and force field, 1988 or earlier