Anime: boy spawns down monsters, including a floating eyeball, is saved by an adult from drowning when diving to look for a boat [duplicate]

When I was younger like 6-7, I used to watch an anime.

There was a guy, he looked more realistic than other animes. I remember something that he could spawn down monsters (I remember one monster which was like a floating eye something like that). I also remember in later episodes that they would bunch up as a group, the guy, a girl kinda the same age as him with both an older guy and a woman.

I remember tiny parts of some episodes like one they would be running from the bad guys on roof tops or something like that.

I also remember that in one episode, the two guy were going on a dive to a boat wreck, the younger one passes out and is about to drown but the older one saves him and gets him back up.

I used to watch the anime on a French channel on TV, it was dubbed in French.

story-identification anime
Share
Improve this question
edited May 19 '19 at 6:49

That's Huntik, an American-Italian cartoon aired between 2009 and 2012.

From left to right, meet Sophie, Lok, Dante and Zhalia (who's not yet a woman but can be perceived as such).

I remember something that he could spawn down monsters (I remember one monster which was like a floating eye something like that).

The four main characters are "Seekers"; Seekers can summon creatures known as the Titans with the help of several amulets. Here's a sheet with all Titans and their summoning amulets, and the floating eyeball you remember is the Red Searcher: 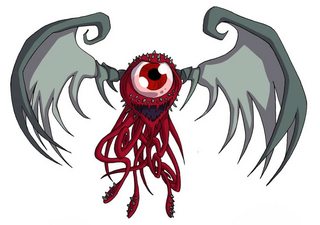 In one episode, the two guy were going on a dive to a boat wreck, the younger one passes out and is about to drown but the older one saves him and gets him back up.

That's episode 10, "The Treasures of the Argonauts", and the clip of Dante saving Lok is on YouTube:

Found by habit, as I had identified that five times before. When searching for "people summon creatures"-like animes, I now first check whether Huntik matches.

10
Anime with a boy hiring a creature from a stone, meets a man named Dante and starts a journey to collect crystals
10
Anime about boy & summoning monsters

4
Need to identify a historical-themed military anime?
9
Movie with forest eating the moon?
5
Animated film where spaceship crew is being killed by a disease; red "berries" on a wall
10
Anime about boy & summoning monsters
4
Anime with a ship in a sky and people with abilities/powers fighting
6
Looking for an older maybe 20 year old Mech Anime
6
What's the anime where a girl who comes to town to fight an enemy meets a guy who lives with an old man? (It's not Bleach)
5
Anime where people summon monsters using gun-like devices that carve patterns in the air