Which work of science fiction was first to link alien invaders with Halley's Comet?

The 1985 movie Lifeforce featured space vampires traveling in the tail of Halley's Comet. Is Lifeforce the first work of science fiction to link invaders from space with Halley's Comet?

The 1942 book The Comet Kings featuring "The Futuremen"

Trapped in the depths of Halley's Comet, the Futuremen battle fourth-dimensional monsters in a titanic struggle to save the system's solar energy 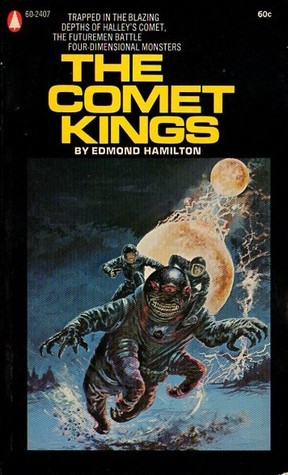 "Look, Simon! The first slops that vanished did so near the orbit of Uranus. The next ones disappeared further Sunward. The location of disappearances has steadily moved in a Sunward direction."
"That's true," the Brain admitted. "Does it mean anything?"
"I don't know," Curt muttered. "But Halley's Comet has also been steadily moving in a Sunward direction, during these vanishings." His eyes flashed.
"Simon, I know it sounds insane, but I think that Halley's Comet has something to do with this mystery!"

"They were all drawn into the comet by a magnetic beam, the same as we," he declared. "Simon, that beam was deliberately projected to seize us!"
"Aye, lad," came the answer of the helpless Brain. "There's intelligence and menace inside Halley's comet."

Not the answer you're looking for? Browse other questions tagged aliens history-of science-fiction-genre origins alien-invasion or ask your own question.