I'm trying to remember this book I read back in the 90's but I suspect may be older.

Humanity gets discovered by three alien superpowers and they split humanity into three groups and take over/enslave them.

I think one empire is called the exchange and they are like a capitalist empire, one is like a machine civilisation and the third are parasitic?

They discover a being that resembles a demon on a planet and find out that the demons where actually an ancient race that visited all the planets in antiquity as they exist in all of the alien races mythologies.

Each empire then assembles a team to try to reach the demon (can't remember why) and it's a race as to who can get to it the first. I remember the demon race travel by using tesseracts and humans are marked on their fingers with different coloured bands to tell people if they are telepathic or telekinetic etc.

The book art was a guy looking at a huge block of ice in which a huge demon like creature is frozen.

story-identification books soft-sci-fi
Share
Improve this question
edited May 20 '19 at 15:30

From this Goodreads review:

In this series, the galaxy is split into three mutually antagonistic power blocs, the Exchange, the religious nutters of the Mizlaplanian Empire, and the evil dog-eat-dog empire of the Mycohlians. Humanity went out into the stars and found itself just another alien race among the many claimed by these three polities.

The Exchange is ruled by the mysterious never-seen Guardians, and is pure Rand-like capitalism from top to bottom. The Mizlaplanians have hugely powerful mental powers and have convinced everyone they’re gods and those of their subject races with “normal” mental powers are angels and saints. The Mycohlians are parasites and they pretty much leave their anarchic empire to run itself, assuming that the cream – the most ruthless and violent cream, that is – will rise to the top and keep everything together.

An Exchange scout ship finds a pair of the eponymous demons on a remote world, and sends out a mayday before being slaughtered. The novel then spends a third of its pages describing the formation of an Exchange team to investigate, then a third on a Mizlaplanian team to do the same, and the final third on the Mycohlian team. All three head for the remote world, where they find a butchered research team, the demons have escaped and… continued in the next book of the trilogy.

The cover matches your recollection as well: 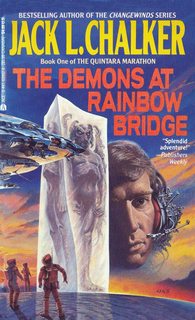 19
Trying to identify a short story about a dog and how it's being left behind resulted in a human /alien race alliance
11
1980/90s scifi book about a librarian who recommends 3 short stories to two students at an alien university
7
Story about a planet in a binary system
3
Sci-fi book about alien invaders
8
Book - Three teenagers find a spaceship and gain powers from headsets in it
7
80s (or earlier) sci fi book, humanoids bossed around by aliens
26
Sci-fi book about humanity barely winning a war with an alien race, after which the protagonist discovers some secrets about the conflict