In the early 90s I read a paperback book that may have been published earlier (probably mid-late 80s), where humans can enhance themselves by implanting up to 3 processing cores/nodes in their body. There was insufficient space in the human body for more than 3 implants, and the implants needed to be inside the body to interface with the nervous system quickly enough to be of practical use (at least, I think that's the reason).

At the start of the book the male protagonist couldn't afford implants, and in some kind of financial trading or business dealings he was losing to implant-equipped rivals. Somehow, he obtained his first implant (possibly through corporate sponsorship).

I think there was faster-than-light travel, but definitely no FTL communication at the start of the book. The antagonist either invents FTL communication himself, or is at least involved in the research somehow. He is able to bypass the 3-node-per-person limit by using the FTL communication technology to connect to extra nodes/cores that are located outside his body. Using his extra processing power, he's able to kill implant-equipped humans by launching some kind of electronic attack on them via their implants. I believe he uses this to eliminate anyone who knows of the FTL communication discovery, and possibly to harvest extra cores/nodes from the deceased.

The three nodes (they were called "plex cores") per person limit, the murderer who has exceeded that limit, and electronic attacks on other people with implants (an aristocratic class who called themselves "Luculenti") sound very much like John Meaney's To Hold Infinity. 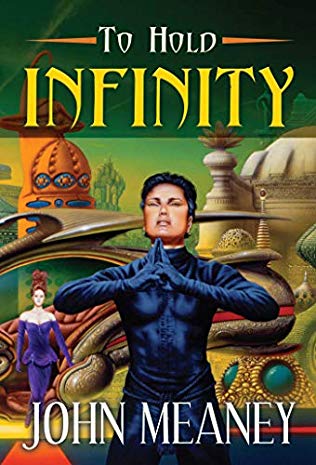 Earth-based biologist Yoshiko travels to the paradise world of Fulgor to see her estranged son, hoping to bridge the gap between them. However Tetsuo is in trouble. He is unwittingly caught in a conspiracy of tech-trafficking and corruption, and in the sinister machinations of the ruling elite.

8
identify book: fantasy series (?), protagonist priest, antagonist vampire king
5
Help me identify this book that uses cloning for space travel
15
Book where FTL is generally invented in the bronze age
4
Book where the hero uses skin/entrails of dead prisoners to escape
9
Book: One person left alive, uses computer terminal to discover the why, lots of code in the text
8
Book where aliens implant a human brain in a fighting machine
6
SciFi book where a poor boy uses his brain to power a spaceship