What color can lightsabers be?

I just saw the fan film Broken Allegiance and the Force-sensitive bounty-hunter, Korbain Thor, wielded an ochre lightsaber (or at least that's what the wiki entry described it as).

I'm just wondering if ochre is a canon color for a lightsaber? 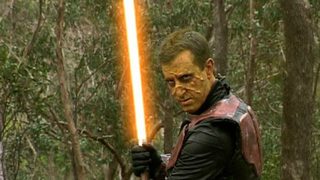 Lightsaber blades are powered by the Kyber Crystal it contains which gets its color from its being attuned to its owner. Most typically, they end up blue or green. Since the crystals were inherently attuned to the Light Side, Sith/Dark Side users were forced to "bend" the will of the crystals, making them "bleed", creating the red color. Currently, the only known colors are:

Thus far, synthetic crystals have not appeared in the new canon. While Pablo Hidalgo, has said that his tweets should not necessarily be treated as canon, he has noted that "No, the synthetic crystal thing is Legends. Maul. Sidious. Vader. All those were kyber crystals."

So, in Disney Canon, there is no evidence that a lightsaber could be "ochre" specifically, but one of the "yellow" hues may come close.

Lightsaber colors are determined by the crystals used to power the blade. In more modern times, synthetic crystals were created and used instead of mining natural crystals. This made blades of almost any color possible.

That said, here are the known colors of lightsaber blades as per Wookieepedia.

As you can see, there is no "ochre" listed, but as Chetter pointed out, "ochre" can actually mean a few things. Without specifying a variant, "ochre" usually refers to a golden-yellow or a yellow-brown.

Ignoring synthetic crystals, there are two crystals which produce colors close to these shades: 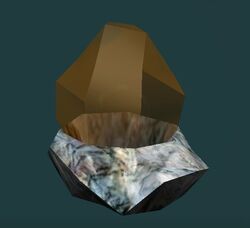 To be fair, Ulric's Redemption is a little closer to brown than yellow.

21
Has there ever been a black lightsaber?
-1
Can lightsabers be periwinkle?
31
Why do the Sith use red-colored lightsabers, but the Jedi don't?
6
What's the most money actors earned for Star Trek in each era?

10
Does the Force Have Color That Can Be Seen?
13
Why don't we see more dual-phase lightsabers?
12
Why do lightsabers attract Force sensitives?
14
What is the shape of a lightsaber blade?
9
Is Jyn Force-Sensitive?
13
When did we first see a purple lightsaber?
28
Is Vader's Force Choke specifically a dark side power?