Marvel Comic with Ant-Man and Spider-Man holding a weapon

I am looking for a story which I can only remember one page from.

It starts with the villain saying something to the effect of "you don't dare to fire that". It then cuts to a panel with Spider-Man holding a weapon, with Ant-Man (who is normal sized) next to him. The next panel has Ant-man press the button to trigger the weapon.

Art style was definitely newer, but as I am unfamiliar with comics I am unable to provide an accurate age, but it was probably Ageless Age.

I have found the panel, here it is: 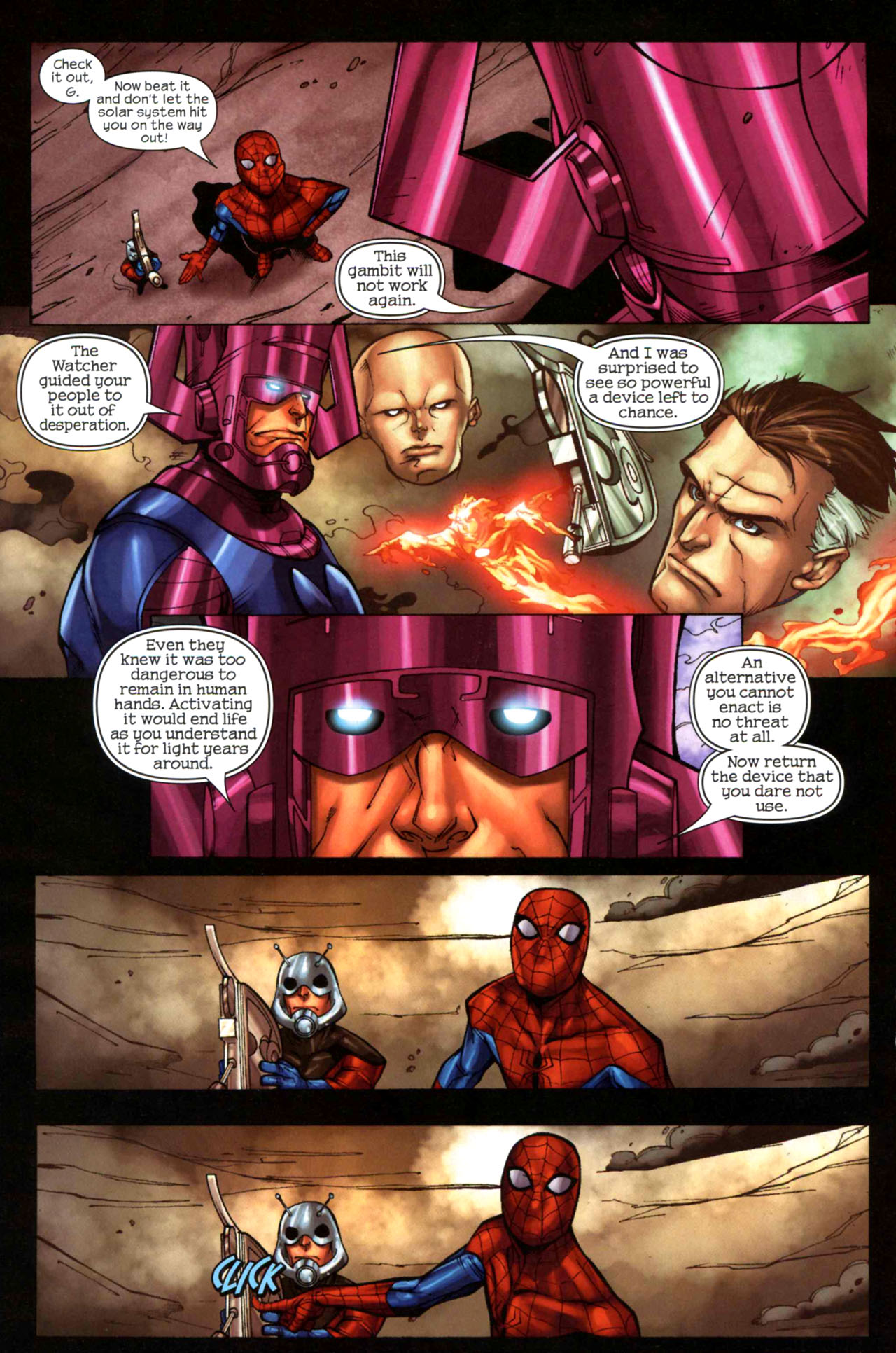 As is plainly visible, I got who was holding the device and who presses the button mixed up.

What is the comic this is from?

I believe this is Marvel Adventures: The Avengers #26

It's the bottom of the ninth, the Avengers are down by two, two strikes down and bases loaded. The stakes for the Cosmic Pennant have never been higher. How will Galactus call this one? Okay... we admit. We have no idea what's going on in this story. Kirk drew the cover, and now Parker has to come up with something. THAT'S GOOD COMICS!!!

The weapon in question is the Ultimate Nullifier

Galactus, of course, isn't easily swayed. He's hungry, he wants a planet, and he finds inhabited worlds particularly satisfying. The aliens know from Earth history that Galactus was once swayed away from the planet by being bribed with the extraordinarily powerful Ultimate Nullifier, but even after Ant-Man manages to steal the device from Galactus' ship, the Devourer of Worlds isn't worried. He's now convinced that the Avengers wouldn't dare actually use such a device, as it would end life as they know it. Spider-Man calls his bluff, because he's Spider-Man, and activates the Nullifier.

FWIW, I found it via a Google search for ant-man spider-man galactus, which brought up the panel, as well as one of Ant-Man declaring, "The Ultimate Nullifier!", which led to me adding that to the search query, which mentioned the issue. From there, I just looked for reviews of said issue to get more details.

Not the answer you're looking for? Browse other questions tagged story-identification marvel comics or ask your own question.

16
What are the differences between Spider-man and Ultimate Spider-man?
7
Spider-Man comic with several villains in it
1
Ant-Man Movie glossed over an amazing weapon
7
Marvel comic with robot aliens and major superhero deaths
10
Spider-Man and Fantastic 4 crossover comic with Double Identity Scene
10
Looking for the comic book where Spider-Man was [mistakenly] addressed as Super-Man
5
VR PvP game with space-like physics
1
Spider-Man comic with him complaining about New York
17
Maze-game with top-down perspective, each level you need to kill monsters and destroy their dens