Who is in charge of Wakanda?

T'Challa got dusted, and Shuri is MIA.

Who is the ruler of Wakanda after the snap?

At this point, Unknown

In my opinion, the best answer I found would be on Reddit. Click here where the article (as well as the comments) describe the line of succession in Wakanda. In one of the comments by user [rogthnor]

Basically everyone of royal blood is allowed to nominate themselves for kingship when the old one [king] dies.

To answer your question, in my opinion, anyone of royal blood who would be willing to take the position, or anyone in general who fought for the position would technically be the new ruler.

The Avenge the Fallen poster for Shuri for Avengers: Endgame was that of a snapped victim and she shows up in the missing screen at the Avengers HQ in the film, as such it seems she was snapped. Even if Angela Bassett the actress who plays the Queen Mother previously stated she thought her and Shuri survived. 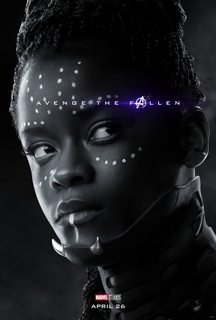 So that would rule out Shuri and it's unclear if the Queen Mother would take control if she survived. However, the leader, whilst generally a formality as it is passed down from the royal bloodline, can be challenged by the other tribes. And the leader also takes on the power of the Black Panther and whilst the Heart Shaped fruits are destroyed it might remain as is tradition.

There is the possibility of Okoye taking leadership but she is the general of the Dora Milaje and the head of Wakanda's armed forces and intel. She's not of royal blood to the throne or any of the tribes per my understanding so wouldn't traditionally be in a position to try and take the throne. She does seem like a traditionalist so probably wouldn't challenge for it in my opinion.

However, of note is that there is apparently going to be a Black Panther 2 and with T'Challa back this could play a role in the film with him once again struggling for power. We will have to wait and see.

Unless they write in a new character, there are 2 logical choices for kingship or Queen . 1- M’Baku was a formidable opponent and was also inducted into the council at the end of Black Panther. (My preference) 2- Queen Mother Romanda might have been alive after the snap but we don’t have enough knowledge of Wakandan politics to confirm.

Those are my best theories. I just hope they don’t Game of Thrones this up and elect a random person.

Not the answer you're looking for? Browse other questions tagged marvel marvel-cinematic-universe avengers-infinity-war avengers-endgame or ask your own question.