How is it determined what Allomantic power is taken?

In The Hero of Ages, it is said that

Hemalurgy can steal one Allomantic power from a mistborn per spike.

How is it determined which of these is stolen?

My question was about Hemalurgy. There was a disagreement on the last Shardcast. When spiking a Mistborn to charge a Hemalurgic spike, does it matter how the Mistborn is killed or is what power is stolen based only on the metal?

So you want to place the spike in a specific place.

In the recipient. And you want to use the specific metal and so basically if you aren't precise about how you spike, you risk taking the wrong thing within the same family. Some of those, that's not as big a deal, but for some it is kind of a big deal. And so you want to be very precise, you'll get something, but if you're not placing the spike in the right place and going into the right place, then you risk it.

You risk stealing the wrong thing.

Yeah. Now if you're going off of somebody who's not a Mistborn, you can be a little more flexible, but you still have the danger that you're not going to end up stealing the power, you're going to steal something else. So, precision is advisable, how about that?

So this WoB establishes that the location of the spike is critical (it goes on to describe the problems with atium spikes, and how location is very important for them because they can steal any power, but that's a lot of filler for this answer).

Different metals spiking different powers is something that you can notice throughout the novels. We finally got more information on it from the hemalurgy chart: 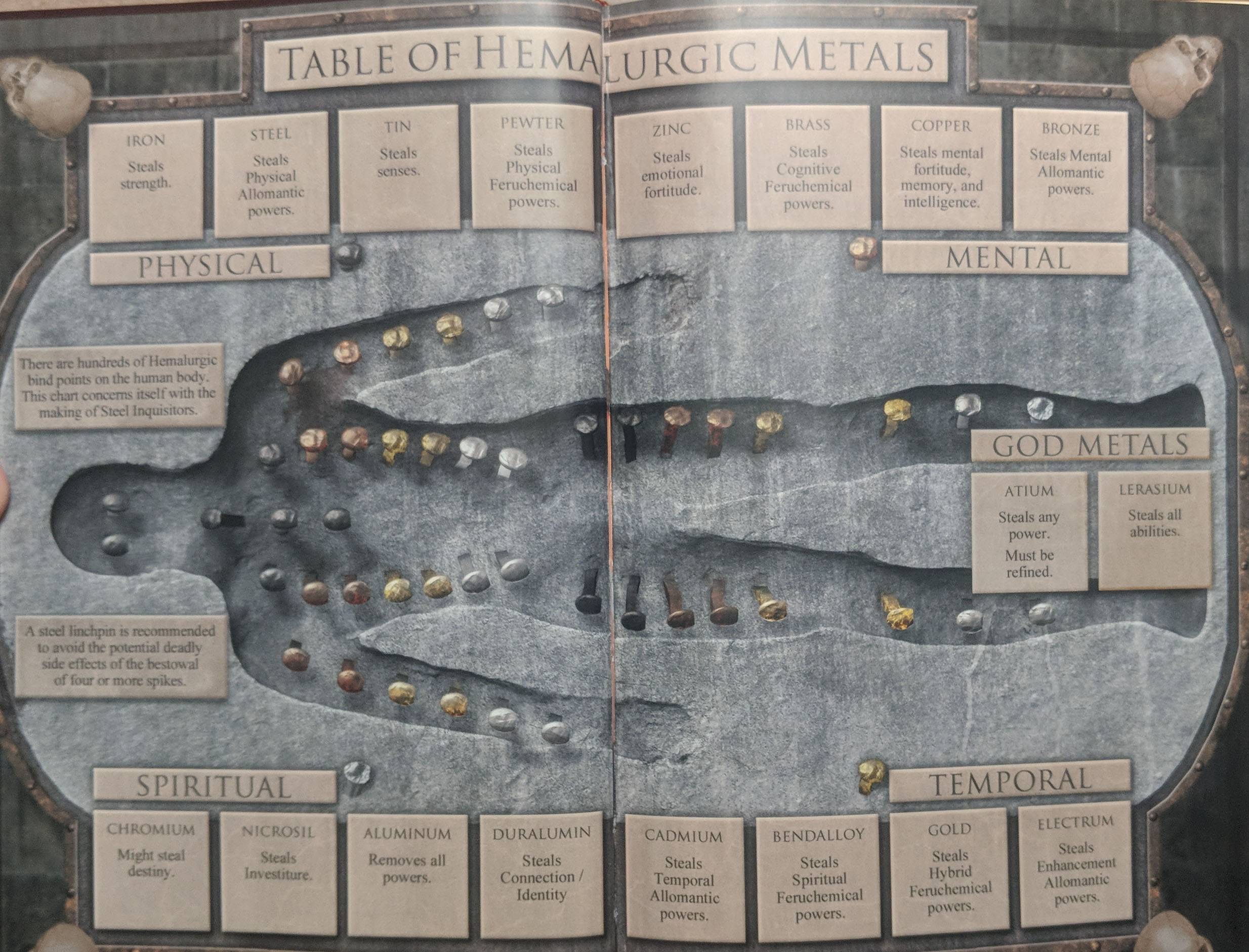 This chart explains which powers each of the metals takes. Note that the outline of a body with the spikes on it is showing the bind points; which is where a recipient of the powers should place their spikes. It is still not clear what locations the donors have to be spiked when taking powers, only that the location is important.

Antheloth mentioned intent, and intent does play a role; but as far as I'm aware, the role of intent is more to make sure that a power is actually stolen when someone is pierced by metal. This is so that you can't, for example, accidentally poke yourself with a nail and take a piece of your soul away with it.

It seems your Intent determines what is stolen.

Phantine: If I stab someone with a steel spike to steal their physical Allomancy, what determines which power I steal? Where the spike is stabbed into, my Intent, or some other factor?

Brandon Sanderson: Intent is at play once you get to the finer points of Hemalurgy, but that can get wonky, as evidenced by some certain events with Spook and even Vin.

Not the answer you're looking for? Browse other questions tagged magical-theory cosmere mistborn or ask your own question.

5
How can Shan Elariel burn brass in her glove?
8
How do the inheritance of Allomantic powers work?
14
Mistborn, Hero of Ages - The 'snapping' done by the mists reveals mistings. Of these, 1/16th burns Atium. Why 1/16th?
4
In "The Hero of Ages" how did Spook know to write in metal when sending his messenger?
7
Do we see a victim of Hemalurgy who isn't killed?
8
Who can see Preservation?
7
How are copper mistings discovered?
5
Which eye spike did Marsh lose?
5
In Mistborn, why can metal in people's bodies be affected by Allomancy sometimes?