I read this book in the late 80s or early 90s. It was not new at the time. There was an uncrewed, automated seed ship (spaceship of genetic material or records but no actual organisms) sent out from Earth to populate a new planet. I don't remember why.

Something went wrong with the ship during the journey (of course!) and the ship had to make a person from the seed banks to fix things. The person does fix the problem and the ship can continue the journey.This first person stays awake and alive for the entire rest of the journey. But they are lonely, so they use the ship to make a baby for them. The baby is a girl. As she grows up the first person goes from feeling paternal toward her to falling in love.

After landing, they oversee the mission of making the planet safe and habitable for the future population. Other people are made including a male the girl falls in love with. The first person declares their love for the girls. She does not return their sexual love, just sees them as a parent and friend.

Plot twist: turns out the first person was made without any sex organs because the little meteorite that damaged the ship in space messed up that part of the process of making people.

The first person eventually accepts that they can not fulfill the girl's wish for a companion because they can never have sex. And they give oversight of the mission to the girl and the guy she loves (he also loves her). The first person goes to live alone somewhere else on the planet.

The plot twist and its resolution were both at the end of the book. Throughout the book it's heavily implied that the first person is male although I remember flipping back through the book when I read it because I was so surprised back then. It was somewhat ambiguous, I can remember thinking I should have noticed.

This book was not a kid, teen, or YA book. My rural library really only had adult scifi. The conversations about sex organs, sexual relationships, and associated issues were blunt and detailed. I don't say explicit or graphic because I think that would give a wrong impression due to connotations associated with those words. For all that love ended up being a big part of the ending, this was a rather dry story. Hard scifi for the time, although I think people today might take issue since the science of how the ship, terraforming, and genetics work was a bit hand-wavey.

The book cover had a black background, or possibly a starry black sky. Across the middle was a golden rocket ship - the old 50s style ones that look like a fat dart. From out of the ship comes a bumpy golden cord that connects to a person sitting on the ship. They are drawn too big for the ship - the ship is a size perfect for being the person's seat. The person is in a pose that is either an exact copy or a strong call back to Adam's reclining pose on the Sistine Chapel ceiling in the Creation fresco when God and Adam each have a finger extended to one another.

What was this book?! I have done a LOT of detailed Google searches over the years and tried the ISFD. I've done book cover searches too. I just can't find it, my google-fu is too weak. Thanks any and all!

ETA: the planet did not have to be terraformed, IIRC, it was already Earth-like. They just needed crops, livestock, and shelters built. Also, I think this ship was not the only one of it's type. I have a vague memory of something at the beginning of the story where there's a mention that nothing is supposed to go wrong anymore- presumably because these missions are old hat.

This is Manseed by Jack Williamson.

The project was simple in design yet grandiose in its aim: a thousand tiny ships would crawl to the stars; each that landed on an Earth-type planet would produce several dozen colonists; each colonist would be a product of the genes derived from Megan and her experts. Every ship would manufacture cyborgs for repairs and self-protection. 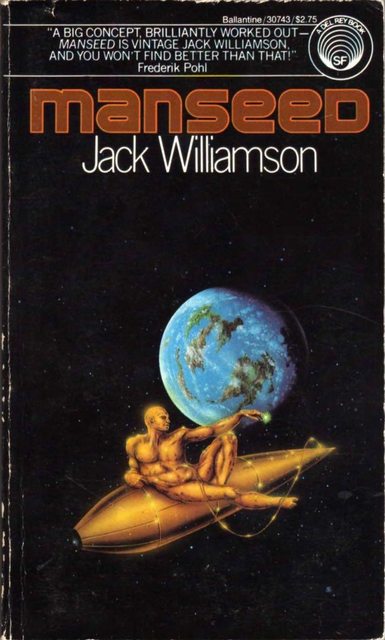