Why didn't the demolition bot stop once it became obvious Spooner was in the house?

While searching the house of the late Dr. Lanning the demolition bot outside

Gets reprogrammed to begin demolition immediately by the AI known as VIKI.

At one point the demolition bot is traveling through the house towards Detective Spooner as he runs away from it. 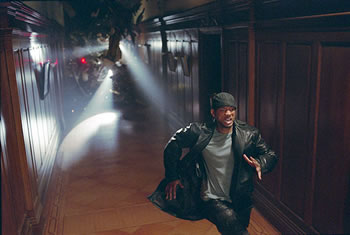 Why didn't the demolition bot stop as per its 3 laws AI programming?

As I understand it VIKI was only able to override the 3 laws on the new NS-5 models, because of their wireless update capabilities. She wasn't able to override any AI device, otherwise she would have also done with the NS-4 models which were being replaced.

I doubt she could update all of the NS-4 models, as they'd all need to be put into update at the same time for the mass control effect she wanted. Plus they were probably limited in what sort of reprogramming they could undergo without becoming suspicious.

The Demo bot on the other hand probably has very simple software, and may not have even been 'sentient' like the NS-4/5 bots. Reprogramming a single bot that is constantly being given new demolition instructions is probably a lot easier, and risk free (considering the limited demolition time) than a world full of old heuristics robots for the foreseeable future.

I do not think that the demolition robot was aware enough of its surroundings. It was not really a 'robot' it was just a machine.

All it knew was that it had to smash the house down. It would not have been designed with human detection equipment as it would have had a user (human or robot) which would perform that task, however when the user decides to not perform that task then it is not the demolition unit's fault any more than it would be a hammer's fault if I hit you with it.

It can also be argued that the Demo bot knew Spooner was there and carried on even though it knew but that this didn't break the 3 laws.

The Demo bot has received its orders from VIKI and VIKI is applying the 3 laws to the whole of humanity (i.e. the 1st law becomes "No robot may harm humanity" - although it can be argued that any action causes some harm to humanity so a better version of the law applied to humanity would be "Any robot must always act in the way that harms humanity the least"). When the laws are applied to humanity as a whole in this way then the death of a few humans becomes allowed (think of any group, fiction or not, that believes it works for "the greater good").

Asimov actually deals with applying the laws to humanity as a whole (although not human deaths). If you haven't already then I definitely recommend reading the original novel "I, Robot" by Asimov and also "The Rest of the Robots" by him as well :)

Not the answer you're looking for? Browse other questions tagged laws-of-robotics i-robot-2004 or ask your own question.

16
In the movie I, Robot, how does USR have military contracts if robots have to follow the first law?

4
Why does US Robotics destroy Lanning's house?
1
Why did the demolition time for Dr. Lanning's house change?
10
Why didn't Powell & Donovan just tell Speedy that they would die without the selenium?