In the late 1960s I read a fascinating science fiction novella - part of a double header paperback series (Ace Doubles books?) - which I have been trying to identify.

The lead male character discovers he can enter rooms etc where he is ignored - treated effectively as invisible. Room occupants give him a cursory look then just ignore him. He can appropriate money - from banks, take food and possessions without suspicion. Eventually he walks unnoticed onto a space ship and continues the adventure on other planets.

Definitely not Niven’s novel A Gift from Earth. The action as I remember starts on Earth in the not-too-distant future. Space travel is relatively new. The crime aspect I recall alludes to Silverberg, but he does not have his character sneaking onto a space ship on Earth bound for the planets, which is a strong memory for me.

story-identification novella
Share
Improve this question
edited May 27 '19 at 16:06

(An update from the original poster confirms that this is not the answer.)

Matt Keller has a psychic power that is sometimes useful and sometimes inconvenient: when he feels nervous, people ignore him. To be affected, people must initially see him, although then they immediately lose interest. As a boy, the power kept him safe from bullies; as a young man, it interferes with his romantic opportunities.

Matt is one of the underclass on the segregated colony world of Plateau. He becomes caught up in a revolutionary group infiltrating the privileged class's centre of authority: the two colony ships that brought humans to Plateau. Matt uses his power to steal supplies, evade capture, and rescue prisoners.

Matt's journey does not literally take him to other worlds, but it does take him to parts of Plateau that are reserved for the ruling class.

You can borrow A Gift from Earth as an e-book from The Internet Archive. 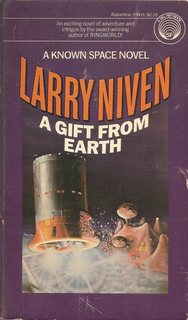 Was the pseudo-invisibility forced upon him? Robert Silverberg wrote a novella called "To See the Invisible Man" about a protagonist who is sentenced to be invisible. Among other things, he enters women's dressing rooms. The story was based on/inspired by a short story of Borges.

It sounds a lot like Larry Niven's 1986 novel A Gift From Earth, set in his Known Universe future history. It was originally serialized as "Slowboat Cargo". The hero, Matthew Keller, discovers that he has exactly the psychic power you describe. I can't, however, find any evidence that this book was ever published as part of a double.

15
Short story about creature(s) on a spaceship that remain invisible by moving only during saccades/eye movements
19
Looking for a short story about a girl who can go anywhere without causing suspicion?

6
Sci Fi Novella with different political systems on different planets
14
Sci-fi short story or novella that ends with Earth being abandoned, humans now living in L5 colony and/or other worlds?
8
1960s sci-fi novel with “tanks” for 15-minute or half-hour immersion for relaxation purposes (but is addictive)
16
1960s sci-fi anthology with a Viking fighting a U.S. army MP on the cover
2
Novella with psychic killing, southern family cult camp set on fire by a boy who escapes
3
1960s-ish sci-fi cartoon with an introduction showing a clock counting down superimposed on a eco-finscene
3
Novella where a man bonds with an alien who lives inside of him