I read this novel when I was young and dumb, and I would love to read it again as an adult to suss out some more meaning.

Parts of the plot that I remember:

Super advanced insectoid winged aliens invade earth. They are very random, doing things like cure disease and pour wealth from spaceships in one city, and then fire bomb/laser death another, all for the kicks pretty much.

He ends up at some point at a rebel base where they are trying to fight the invaders, but are wounded and starving.

He gets captured by the aliens, and is enslaved by one of the very high ranking aliens, a Princess, who is spoiled rotten, vain and very cruel. She has a sort of partner who is a warrior, but she outranks him and treats him badly.

They talk, but also use dancing like bees to convey extra texture to the conversation.

She ends up trying to bang the human out of boredom, which is painful for him, and he jumps off her floating ship/palace to try to kill himself after suffering at her hands for a while.

She makes her mate/fiance fly to rescue him, but he signals that the price he will want in return will be terrible.

At some point she is stripped of power and exiled.

She meets the hero at a rebel camp, and she has been de-winged and blinded by her kind. There is a church of Antichrist that has something to do with what is going on.

The alien princess becomes a Christian.

That's all I remember. I am now aware as an adult that the book might have been an allegory for the revelation parts of the Bible. I'm not religious at all, but I'm so curious to find out what my middle-age brain makes of something I read (skipping out chunks) as a early teenager.

story-identification novel
Share
Improve this question
edited May 29, 2019 at 20:29 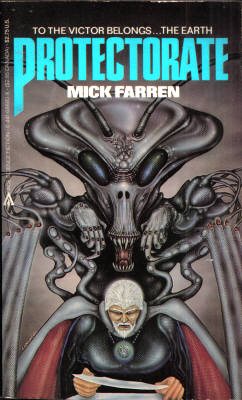 Two hundred years ago, gigantic wasp-like creatures conquered Earth, wiping out all who opposed them with their fantastic brain implosion powers, and destroying all technology, keeping humankind in a feudal police state..the Protectorate. But now a new hero has arisen to overthrow the dictatorial Protector. Religion is his sword and the faith of the masses is his shield. He also has some very powerful friends.

Well, I think this is the book. Although it's in my collection I don't think I have ever read it so while it broadly matches your description I'm not sure if the fine detail matches. I skimmed the book but cannot find anything about a sexual liaison with a Wasp princess. In fact the book deals mostly with the human representatives of the wasps, who are called the Killers.

If it helps jog your memory the hero is called Gywann and his followers the Gywannish. The wasps are described as:

The Wasps were hardly well named. Their bipedal form made them appear less like any insect and more like a tall and angular caricature of a man. Legend wasn’t clear about who had first dubbed them Wasps. Somehow, without benefit of logic, the name had stuck. The most insectlike parts of them were their elongated, ovoid heads that seemed too large for their spindly bodies. At the pointed end of the head there were two dull patches on the otherwise gleaming, patent-leather black of the rest of their skin. These patches were generally assumed to be some kind of eyes. The Wasps’ bodies were laced with an interlocking network of flexible tubes, large major tubes with complicated ribbing that followed the structure of the limbs and the torso, fed into or were fed by clusters of smaller, smooth subsidiary tubes.