How is Princess Daisy a tomboy?

The games say that Daisy is a tomboy. However, I don't see her acting like one. Is there a good reason why she's called a tomboy?

The Japanese instructions for Super Mario Land, the game where Daisy debuted, seem to be where this started, describing Daisy as:

Although the English instruction booklet for Super Mario Land has no such line, the English versions of more than ten other games (search here) describe her as one. Notably, this is what her trophy in Melee says about her:

The princess of Sarasaland, Daisy met Mario when he helped defeat the evil alien Tatanga in Super Mario Land. Princess Daisy is a bit of a tomboy when compared with her counterpart, Princess Peach. After her appearance in Mario Golf, some gossips started portraying her as Luigi's answer to Mario's Peach.

Daisy wears orange and Peach wears pink, but other than that I don't see Daisy as being less girly than Peach. Their dresses and hairstyles are both very feminine. You could also argue that Daisy gets kidnapped much less than Peach, but the first and only game Daisy was kidnapped in is the same one where she was first labeled a tomboy. (Daisy also isn't in as many games as Peach.) All of the other games I'm familiar with that have Daisy don't explore her as a character because they're either sports games or Mario Kart.

From the little I've read of different manga, I see it even less. (However, I am pretty sure that the games and everything else are different canons, and I am not aware of her being called a tomboy except in the games. The more information the merrier though.) In the Super Mario Land manga, Daisy gets kidnapped and Mario goes to rescue her. Peach wants to come along, but Mario tells her "no, it's too dangerous for girls" (i.e. だめだよ女の子には危険すぎる). What does Peach do? She tricks him by disguising herself as a robot and comes along anyway. (This manga can be found freely online in Japanese, but just be warned that it is sometimes NSFW.)

In a different manga (more specifically a 4-koma), it's Peach who's labeled おてんば (otenba, "tomboy"/"tomboyish") in the title: おてんばピーチ姫 (Otenba Pīchi-hime, "Tomboy Princess Peach"). Very little of this manga can be found freely online and it's also all in Japanese. But even from what little there is, it's pretty obvious how she's a tomboy (i.e. her actions). The Mario wiki describes part of it, and the (gross) image that goes with that can be found here.

Another example is these two pages:

Like I said I haven't read much (as I'm inconvenienced by not knowing Japanese), but there seems to be a better case for Peach being the tomboy rather than Daisy.

Princess Daisy is something of an oddity. The first game she appears in is Super Mario Land, which was the first Mario game that did not include legendary developer Shigeru Miyamoto

Unlike previous Super Mario games, Super Mario Land was not developed by Shigeru Miyamoto and Nintendo's EAD division but by Nintendo R&D1, with Gunpei Yokoi as guiding producer.

As such, she isn't Miyamoto character. There isn't anything official about why Yokoi chose to name his princess Daisy, instead of Peach (or Toadstool). In fact, the entire Super Mario Land series was mostly ignored until Nintendo started producing more in-universe material. Daisy would not appear in another game (she was Luigi's caddy in NES Open Tournament Golf, a tertiary role) until Camelot Software produced Mario Tennis for the N64 in 2000.

The mistake here would be in comparing her to Peach. For instance, Daisy and Peach both wear sporty outfits in Super Mario Strikers (Daisy's shown below), and there isn't any real area where Peach is overtly more "girly" than Daisy in any canon game. 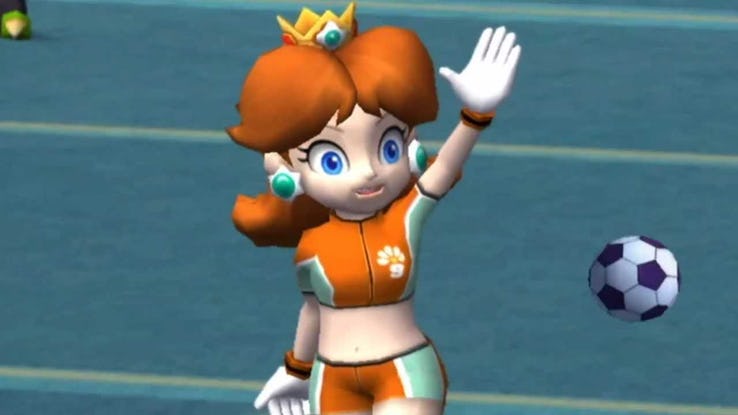 Yeah, sure. Big castle. Woooo. I'm totally impressed. Could use a few more flowers though.

There's also this track from Super Mario Compact Disco (canon on this is unclear), where Daisy is purported to have a British accent and sings R&B

Not the answer you're looking for? Browse other questions tagged super-mario-brothers or ask your own question.

46
How did the Mario Brothers discover/enter the Mushroom Kingdom?
3
How did the Ninja Koopas become giant?
14
Who put the coins in the Mario Universe?