I need some help to identify a show I remember from my childhood - it's driving me crazy I can't name it!

I have a very clear image in my head of a character from the show but I don't think it was a main character. The actor is on all fours; not hands and knees, hands and feet. They have wheels at the end of all 4 limbs. I remember the setting as some kind of futuristic junk yard or tip ["dump" for Americans].

I originally thought it was a TV show, but the more I've thought about it, I think the image in my mind is from a sticker, which suggests I had an album, so maybe it was a film.

For reference, I was born in 1976 and I think this was when I was around 7 years old.

This sounds like Return to Oz from 1985. The character you refer to is a Wheeler. 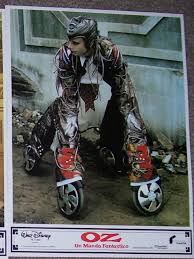