I am looking for a paperback novel I read in the mid 1980s. The cover had astronauts looking at a frozen monolith on Pluto.

The story takes place in the future where mankind has learned to live for centuries at a time, but can only remember the last few years.

There is an expedition to Pluto, and everybody thinks it is the first time humanity has been out that far. When they get to Pluto they find evidence that humans had already been there many years before. The main plot of the book revolves around this.

There is a possibility that I mis-remembered and instead of Pluto it is a moon of Jupiter or something similar.

story-identification books
Share
Improve this question
asked May 31, 2019 at 18:52

The description on Goodreads mentions ice blocks on Pluto and the extended human lifespans and lost memories:

On the North Pole of Pluto there stands an enigma: a huge circle of standing blocks of ice, built on the pattern of Earth's Stonehenge--but ten times the size, standing alone at the farthest reaches of the Solar System. What is it? Who came there to build it?

The secret lies, perhaps, in the chaotic decades of the Martian Revolution, in the lost memories of those who have lived for centuries.

This Ace Books paperback cover (left) shows spacesuited figures in the lower right corner, tiny in comparison to the ice monoliths. Other versions (eg, right) of the cover show similar depictions of this scene: 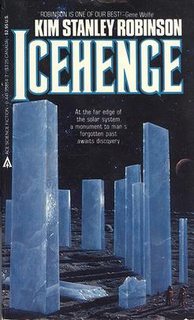 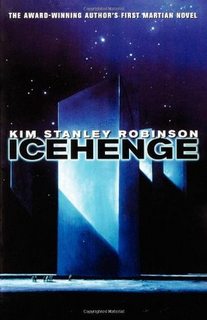 You can borrow Icehenge as an e-book from the Open Library of the Internet Archive.

Although the original poster has confirmed that Icehenge (set on Pluto) is the answer, the question includes this suggestion:

There is a possibility that I mis-remembered and instead of Pluto it is a moon of Jupiter or something similar.

This detail might come from a recollection of The Engines of God (1995), by Jack McDevitt. The cover shows a similar scene: a tiny spacesuited human next to a giant ice sculpture on Iapetus, a moon of Saturn: 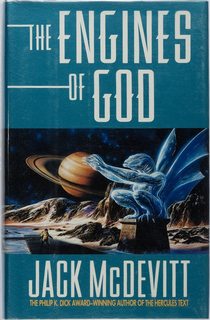 27
Help identify the title of a story about the back side of moon being missing
23
Sci fi story about the universe shrinking and it all goes dark (because of mu?)
9
Aliens destroy Earth. Book follows humanity's rebirth after attack