I played this between 1999 and 2002 on a Windows PC in the United States. The premise of the game had floating islands on which you could build propulsion (propellors?) and weapons (cannons) with which you did battle against other islands. I believe it was 3d polygonal graphics, possibly with a fixed camera behind the island. I think the method for placing things on the island used a hex system (hexagonal 2d map of the surface). I don't remember how resources were gained to buy the island components, but I think you gained them via conquest.

As I was finished my question, the word "stratus" popped into my head, and a bit more searching turned up Stratosphere: Conquest of the Skies. 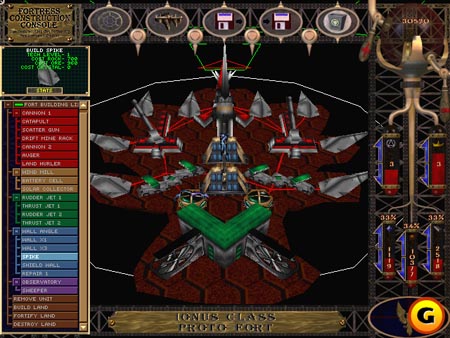 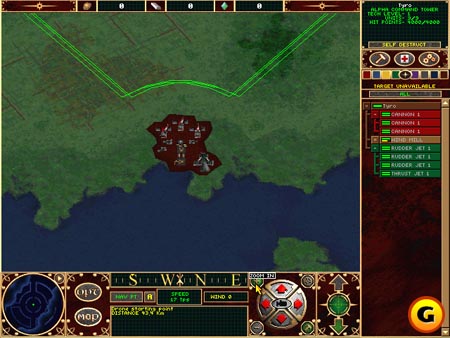 Gameplay consist of the player controlling a single floating island which are called flying fortresses in the game. These fortresses float because they are built from 'floatstones' which can be collected from mountainsides and also from other fortresses after damaging them. There are three types of floatstones each used to build different structures on the fortress. Extra land can be added to the fortress but at a limit of its fortress size class.

Through the build view, fortresses can build structures that increases maneuverability such as thrusters for moving forwards and backwards, and side thrusters to rotate the fortress. The amount of these maneuverability structures determine the power. They can also build gun turrets and defensive structures such as walls and shields as well as energy generating structures and also some unique structures. Each requiring different amount of resources from three different types of floatstones.

All flying fortresses float at one altitude. Turrets are controlled with the mouse and can be fired at wanted direction after clicking on position that is in its firing range. Some turrets can also shoot at ground level, which is used during missions in the campaign to destroy turrets placed on the ground.

9
Book Ident.? About kids getting sucked into video game
3
What is the name of this sci-fi strategy video game?
4
Looking for the name of a video game involving spells and wolves
7
Animated movie or TV series including floating islands and ships
10
Video game with alien bio armor
8
Norse mythology video game with someone trapped by their hair