I don't remember the title, but I remember some of the plot and what the characters looked like. It was sci-fi.

I remember it was about a princess (I presume she was) being abducted and our heroes travel on a spaceship to rescue her. The main male protagonist was thin, wore blue jeans, green T-shirt, carried a knife, among the rest of the rescuers there were two other guys, one wearing glasses, grey trousers, white T-shirt, was extremely fearful. There was a fat guy who most likely wore a green T-shirt, very fearful too. Also, they had a robot teammate accompanying them.

There was a scene where our rescuers reach something resembling a shaft, with blue walls. A descent into the cave. They start climb it down. As they look down, it’s descending into darkness, while when they look up, there’s a bright light above. Then they end up inside an underground cave.

The only villain I remember was the cyclops in the cave, this one scared me a lot as a kid. I remember there's a part where the princess is shown chained in the cave and the cyclops was sleeping beside her/guarding. As the heroes are walking the cave, Pink Floyd's "Time" is playing (I remember that part was very scary back then).

That's all I manage to remember, the easiest way to identify this would be the cyclops and Pink Floyd's "Time". It was a wonderful anime from what I remember.

Three young children are fascinated by space. One night they saw a flying object crashing into the forest. Ruru, the king of the children of the kingdom of the space is on board. Ruru invites the three musketeers in his realm of space. During this journey, a terrible battle began in space to destroy the enemy in the middle of a meteor shower.

That crew should probably ring a bell. Four guys mostly matching your recollection, a princess, a robot companion. 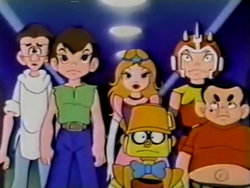 The whole movie is on YouTube, in (I assume) Greek but you can see the princess jailed at 41'16, and an asleep cyclops shortly after.

Found by searching this site for [story-identification] anime princess spaceship which brought up Animated Movie identification (before 1990), this description looked promising:

The main characters are 3 boys in our own time which see a spaceship crash near their town. When they explore the landing site, they see that the aliens look very similar to humans. The Aliens are unconscious. They help them get well and the boys travel with them to their planet. The aliens are ruled by a princess which shows them their planet. But she gets kidnapped by other aliens and the boys decide to rescue her. They travel through space with a spaceship, rescue her and travel back to the princess planet. Then they travel back to earth.

Not the answer you're looking for? Browse other questions tagged story-identification spaceship anime or ask your own question.