I remember a sci fi cartoon from the 80's (possibly very early 90's) and can't seem to find it again. It would have been broadcast on UK TV but unsure what channel - I have a feeling it was BBC rather than C4 and it had a rather unique feeling to it rather than being part of the mass of anime being shown at the time.

The parts I remember are the following:

There's possibly some weird time loop involved - possibly he somehow grows up to become his own rescuer - not sure if I'm confusing it with another film there though.

I think it was fairly in the Japanese anime style for the 80s (certainly not cutesy style drawing).

Boy abandoned on another planet

Check: the main plot is about a group of people who try to rescue a child, Piel, who found itself alone on a remote and dangerous planet (Perdide) after an accident 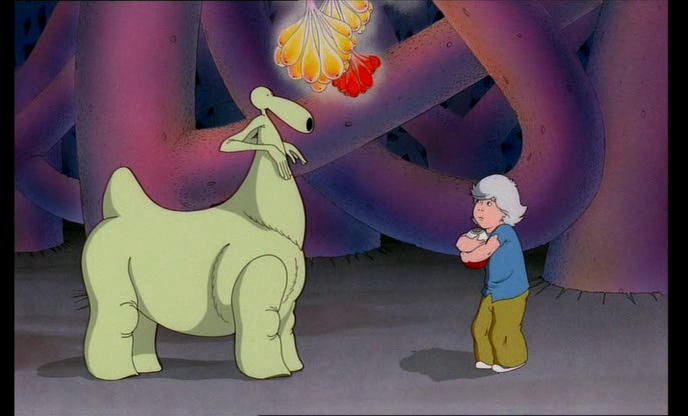 Gets attacked by birds who peck at his head

Check: the boy was severely injured on the head at some point, by some wasp-like aliens (more about this on the following spoiler part) 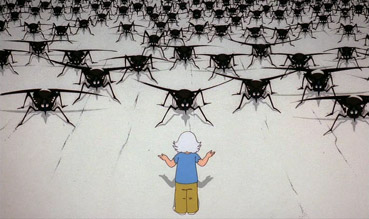 Check (from wikipedia, emphasys mine):

[...] the planet is being transported through time by a bizarre race of aliens known only as the Masters of Time. Perdide and everything on it, including Piel, is sent back 60 years through time. The effect of time travel means that aboard the approaching Double Triangle 22, the starfield appears to go into flux, and the unprotected crew are knocked unconscious. They awake in a vast space-station [...]. The crew have been treated for exposure to the time-travel area, but Silbad is dying. Yula and Jad, telepathically, reveal how Piel was attacked again by the creatures which killed his mother, losing part of his skull before a passing spacefarer came to his rescue. Silbad, when first describing Perdide to Jaffar and Belle, had revealed a metal plate on his head to repair the damage of this attack, but never demonstrated explicit knowledge of Piel, his parents' death, or time travel. It is now obvious to Jaffar and Belle that Silbad and Piel are one and the same person at different points in their life.

12
80's Animated movie: An old man joins mission to save a boy stranded on a hostile world
5
trying to identify SF anime film shown on British TV in 1980s or '90s