Luke Skywalker is arguably the most powerful jedi to ever live, even more powerful than Master Yoda. Yet I have never seen an instance in which Luke has deflected Force lightning with his hands or absorbed it. Galen Marek, Yoda and Revan did it. Shouldn't Luke be able to as well? I've checked everywhere, but I might be missing something. Does anybody know of an instance in which Luke did this (besides my fanfic)?

First of all we don't know that Luke is the most powerful jedi that ever lived. Is Luke special, sure (even Vader said so himself), is he the most powerful, not sure. I will not debate this further in this answer since it's just mentioned in the question.

Force lightning could also be absorbed and redirected by a Jedi of sufficient skill; Luke Skywalker attempted this, and succeeded for a short amount of time, before the Emperor's attack overwhelmed him.

We see that Luke managed to do it briefly, bear in mind that he was still young and inexperienced, with basic training for a few days with Yoda on Dagobah.

Luke DID do this already, though not in the movies, to my GREAT disappointment.

In the book "Return of the Jedi" (ROTJ), after the Emperor first hit Luke with the lightning, he got up and thought "He had never heard of such a power. Cerainly Yoda had never mentioned such a power, never even hinted at it. But if it was force generated, it could be force repelled". So Luke raised up his hand and at first, he was successful, to the amazement of the Emperor.

This proved why the Emperor was SO afraid of Luke, because of course he knew that he had the same potential power of Anakin, which was TWICE what either Palpatine or Yoda had in terms of midi-chlorian count.

Eventually though the Emperors bolts came with more speed and power and overwhelmed Luke. That is why the Emperor said the line "Your feeble skills are no match for the power of the dark side". To me that line made NO sense at all, UNTIL I read the book version of ROTJ, after that it made perfect sense. 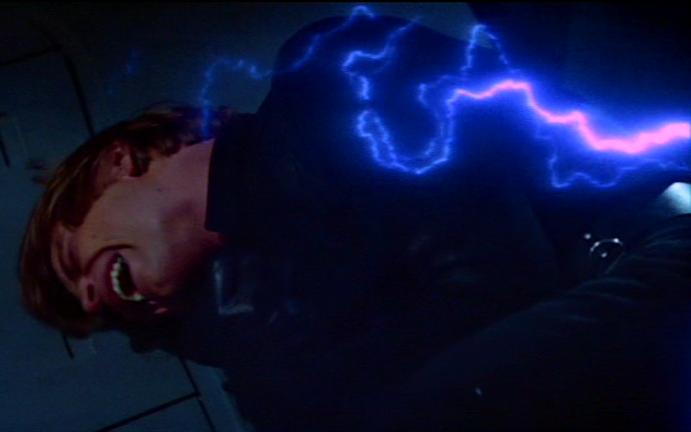 To the best of my knowledge, the only Jedi to ever catch lightning bare-handed without suffering ill effects was Yoda. Luke has no where near the skill that Yoda did, even if his raw ability is potentially higher. I'm sure he could have deflected it with his lightsaber, like other Jedi have done, but he can't catch it.

61
Who is the most powerful user of the Force?
19
Star Wars fan website with false claims

17
What does a high Midi-chlorian count actually mean?
13
Why was Rahm Kota accepted into the Jedi Order?
8
Was Yoda correct about the "Chosen One" and the prophecy?
20
If Darth Vader discovered Luke was his son from the Emperor in the 2004 retconned version of “The Empire Strikes Back”, then how did the Emperor know?
12
Did Luke attempt to retake the Jedi Temple on Coruscant?
7
Which Jedi have served in the Rebellion?
25
Did anyone on Coruscant see/film the duel between Mace Windu and Chancellor Palpatine?
4
Did Vader/Anakin use the Force to kill Palpatine?