What was the first appearance of a sword-wielding canine?

Pokémon sword will include a new legendary pokémon named Zacian which is a wolf-like creature holding a sword in its mouth.

A lot of Dark Souls fans are saying that this is clearly a reference to the Great Grey Wolf Sif, a wolf holding a sword in its mouth.

But then Okami fans point out that their wolf can also wield a sword (though I haven't played this and don't know how similar it is).

And even older is Repede from Tales of Vesperia who certainly holds weapons in the same way.

It seems unlikely that these are all coincidence or even that this is an exhaustive list. How far back does this idea go? Do we have a record of the earliest canine using a bladed weapon (or similar) by holding the handle in its mouth?

Someone suggested Fenrir from Norse mythology, but Fenrir had a sword shoved into its mouth to hold it open. Fenrir did not deliberately use a sword as a weapon, as far as I can tell.

Foo creatures (which typically have both canid and felid features) carrying protective swords are recurring motif in some parts of Taiwan. This blog post catalogs a number of foo guardians with swords at the ready that are visible out the outsides of buildings in the Taiwanese city of Tainan. 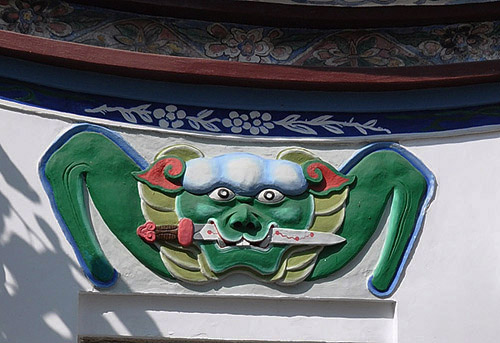 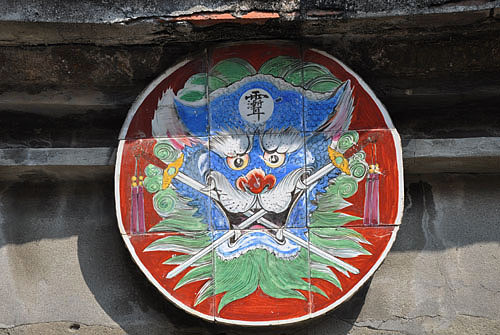 Although these images are only decades old, according that blog post, local folklore dates the origins of this kind of iconography back to the seventeenth century.

According to the legend, during the time Zheng Chenggong defended the Dutch in 1661; the soldiers hung their shields on the wall. The shields were carved with lion face. The soldiers hung their swords in the place near lion’s mouth. It appears from distance that the lion was biting a sword. From there, people believed the Sword-Lion could protect them and is a symbol to ward off evil spirits.

Similar foo dogs with swords can be found in other media as well. 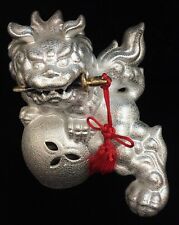 Probably the oldest imagery of an animal carrying a sword in its mouth to fight with comes from, interestingly enough, The New Testament—specifically Revelations—or interpretations thereof.

One common feature of Christian iconography is association of Jesus with lambs. He is portrayed as a shepherd, ministering to his "flock" of disciples and followers; and he his also shown as a sacrificial lamb, who bleeds and dies like a traditional Hebrew sacrifice made to propitiate God. According to Revelations 5:6, Jesus in heavy appears as a lamb. 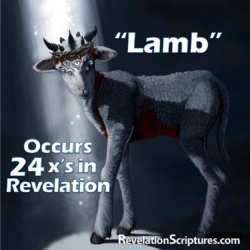 And I saw the heaven opened; and behold, a white horse, and he that sat thereon called Faithful and True; and in righteous he doth judge and make war.
And his eyes [are] a flame of fire, and upon his head [are] many diadems; and he hath a name written which no one knoweth but he himself.
And he [is] arrayed in a garment sprinkled with blood: and his name is called The Word of God.
And the armies which are in heaven followed him upon white horses, clothed in fine linen, white [and] pure.
And out of his mouth proceedeth a sharp sword, that with it he should smite the nations: and he shall rule them with a rod of iron: and he treadeth the winepress of the fierceness of the wrath of God, the Almighty.
And he hath on his garment and on his thigh a name written, King of Kings and Lord of Lords.

Usually, this version of Jesus, carrying the sword in his mouth, is depicted as human. 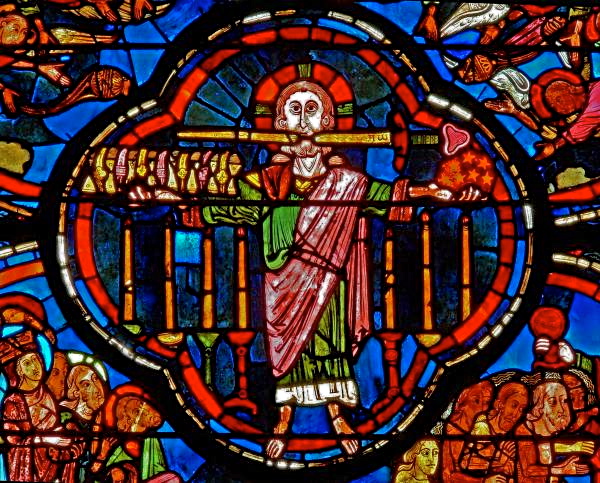 However, since Jesus had already appeared in the narrative in the lamb form, there were occasional depictions of the rider Word of God, King of Kings and Lord of Lords as a sword-carrying lamb himself. It is an uncommon motif, but that iconography does exist.

Not the answer you're looking for? Browse other questions tagged history-of animals pokemon or ask your own question.