The Empire of Man is a vast multi-planetary network of human colonies that have been unified by a benevolent imperial administration. But no intelligent alien life had ever been discovered. Until now, when a strange spaceship suddenly appears on the outskirts of a moderately populated planetary system. Scientists are dispatched to communicate with the aliens and soon an expedition is got up to retrace the path of the alien craft through the wormhole from which it came.

When they get to the alien system they find an amazing and extremely ancient culture the scale and technology of which is 1000s of years beyond humanity. However this species has been trapped in their lone star system for failure to successfully navigate the unique but extreme gravitational and physical geometry of their system. They had up to now never had a successful return of a ship which traversed the wormhole.

The explorers are treated to a politically manicured tour of the aliens' amazing planet. But they soon realize the full extent of the threat the aliens pose to humanity should they ever escape their system. Humanity would be overrun by the aliens in no time. They escape back through the wormhole and put out the warning.

Sorry for all the spoilers of such a great book, but hopefully someone else knows the title!

I just remember there was a cover review quote by Robert A. Heinlein, "Possibly the best science fiction book ever written."

This sounds like The Mote in God's Eye by Niven and Pournelle. 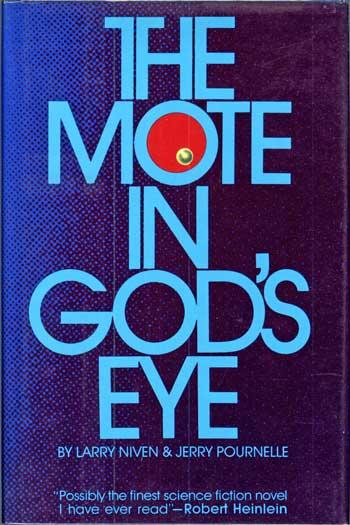 The front cover features a quote from Robert Heinlein, "Possibly the finest science fiction novel I have ever read."

It's set in the CoDominium universe after the rise of the Second Empire of Man.

The moties don't arrive by Alderson jump point, they traveled in a solar sail-type craft that had been propelled out of their system by a set of giant lasers. (The light of these lasers is what cause humans to give the Moties' star of origin the name "Mote" in the constellation God's Eye.)

The humans do use Alderson drive to get to the Moties' system, but the trick is that the jump point to the Mote system is inside the atmosphere of a red giant star. So it requires advanced shields to be able to navigate to the jump point in order to use it. (In the past the Moties had tried to use the jump point, but their ships always burned up on arrival, being unprepared to jump into a star.)

The Moties' planetary system is indeed very well-ordered, every usable asteroid and planetary body parked in a stable orbit and converted to habitat space.

Eventually the humans understand that Motie biology essentially requires constant reproduction, otherwise they die. And since there are limits on the resources in a single planetary system, they regularly fill it up, have wars or plagues and die off, to start again. Free of the constraints of their system, they would overrun the galaxy before dying off. They are also extremely smart; even their semi-sentient helpers, the Watchmakers, can build simple machinery.

When a human capital ship is lost to an infestation of Watchmakers, and the human emissaries discover the military castes, which the Moties were trying to hide, the humans decide they must leave the Moties trapped in their system. The even mount a watch on the jump point out of their system in case the Moties try again to leave.