A science fiction movie where a scientist couple secretly raises a female alien baby. The baby has a tail, and grows into an adult in a matter of months (or weeks). During adolescence, she starts becoming aggressive toward the woman scientist. IIRC, it was a competition thing in order to mate with the man.

Somehow, the man ends up dead, the alien changes her sex from female to male, rapes the woman and impregnates her. At the end of the film, the woman is about nine months pregnant and signing away the rights to the alien/human baby for experimentation purposes. What's the name of the movie?

I think this is the 2009 French-Canadian film Splice. 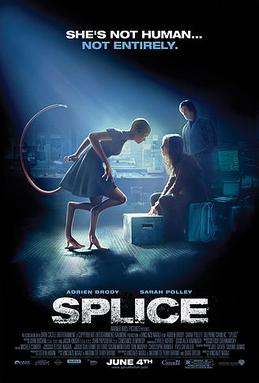 The baby is not an alien, it's a genetic hybrid created by scientists who then attempt to conceal it's existence by raising it themselves. Otherwise, it matches all the details you described.

12
Movie about a couple straying into Alien Quarantine zone
15
Looking for a novel or novella about a federal manhunt for a telepathic alien
5
Alien lizard comes to Earth and becomes a celebrity scientist
5
Movie where nun raises a girl from an egg who is then kidnapped
18
Movie where a bereaved woman raises an angel to help her cross over
32
Robotic Spaceships have a human prisoner to maintain them
8
Movie: astronauts visit a Mars-like planet with aliens passing as humans, alien embarks the ship, which destructs before landing on Earth
8
Anthology science fiction book mid-90's bio-engineering