Are there any mundane animals in "Pokémon Detective Pikachu"?

There are a considerable number of mundane animals seen in other parts of the Pokémon franchise, but are there any seen (or referred to) in the world of Pokémon Detective Pikachu?

Although no mundane animals are featured in the film, there was an indication in the opening sequence that Pokémon may coexist with real-world animals.

The ancient Egyptian hieroglyphs seen at the start of the film replace many of the symbols with stylised versions of pokémon but we can still see the classic scarab and ibis symbols. Although there are pokémon that do mildly resemble these creatures (especially Heracross), there aren't any that are sufficiently close that we'd expect to see these symbols unchanged. 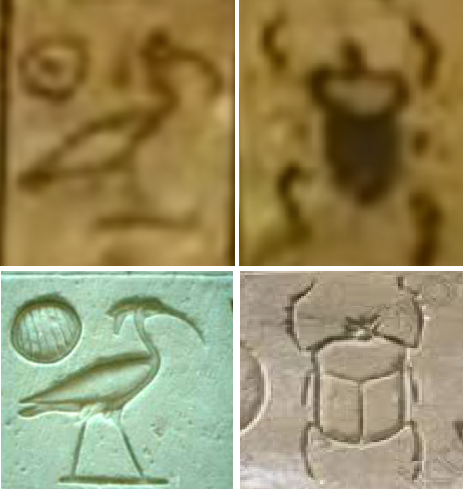 Not the answer you're looking for? Browse other questions tagged pokemon pokemon-detective-pikachu or ask your own question.

19
Do regular animals exist in the Pokémon universe?

16
Who are the Pokémon on the decoration in the Viridian City Pokémon Center?
15
Why are there no Dark type Pokémon Gym Leaders?
19
Do regular animals exist in the Pokémon universe?
16
Are there more than one of each Legendary Pokémon in the anime universe?
19
Why was Pikachu chosen to be the mascot for Pokémon?
12
Are Pokémon animals?
1
Are any furies based on specific Pokémon?
7
Were there any new Pokémon introduced in the movie Pokémon: Detective Pikachu?
10
When do the events of "Detective Pikachu" take place in relation to Ash Ketchum's adventures?