In The Incredibles 2, why does Screenslaver's name use a pun on something that doesn't exist in the 1950s pastiche?

The Incredibles 2, the Screenslaver's name is a clear pun on "screensaver". Screensavers were invented in 1984. The film takes place in a broad 1950s pastiche, and we don't see any personal computers or other similar monitor based devices, rendering this pun completely useless. Yet a villain as obsessed with invention and design as The Screenslaver would surely not pick a name that's completely meaningless! What, in-universe, could have prompted them to name themselves this? What is the joke, if not on Screensaver?

Given the limits of technology, it seems likely that such a device would have a screensaver to prevent the classic green screen burn-in.

You might also want to note that the concept of a screen slave (in the literal sense of a terminal slaved to a mainframe) has been around since the 1950s. The metaphor didn't, I assume, go unnoticed by those who had to sit in front of them all day for work, nor by those who spotted that their friends and family were entranced by the idiot box in the corner of their living room.

“Screens were hypnotizing us 30 years ago,” he explained to HelloGiggles. “Where everybody was plunked down in front of the television and just changing channels and staying there all day. The idea of people kind of forgetting what's going on around them, in favor of what's going on inside this cool glowing box is not a new idea, but it is one that stays with us.”

Because the film isn't actually set in the past

While the film has the appearance of something out of the 60s, it's actually set in a stylized present, imagined through the lens of what the people in the 1960s thought the future would look like.

This is made more confusing by the fact that Bob reads a newspaper dated May 16, 1962 in the first film. 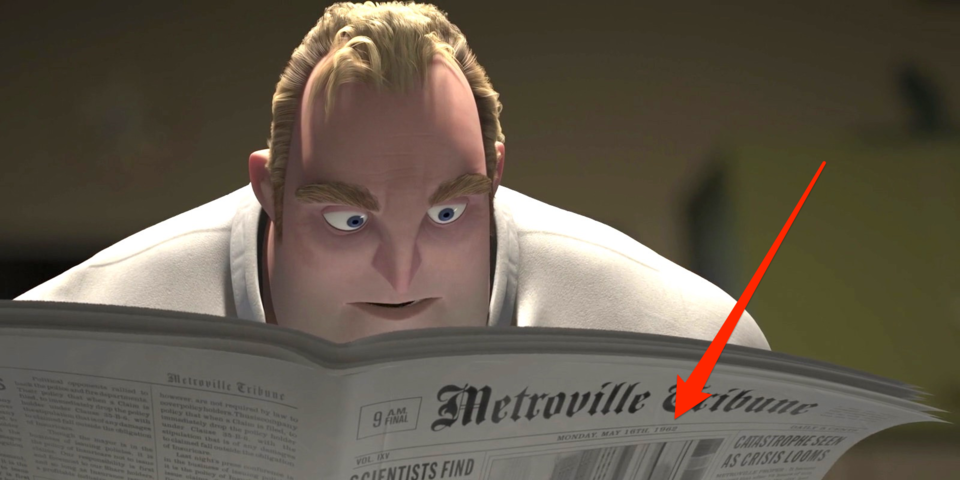 But in a Bustle interview, writer/director Brad Bird and producers Nicole Grindle and John Walker explained:

"I probably wouldn’t have put 1962 on the newspaper if I thought it would get out," Bird said. "I didn’t even know that we did that. I just wanted it to feel like the '60s." Grindle added, "It’s more just like an aesthetic choice than anything," while Walker went a step further, saying the idea was to create a future based on the 1960s. "You [Brad] always said it’s like the imagined future from the '60s," Walker said. "That’s when it’s set. What people in the '60s thought was coming."

This isn't a horribly uncommon style decision either, especially in the superhero genre.

As @CaptainMan mentions in the comments, the idea of an imagined future from the vantage point of a specific time period is a style known as retrofuturism and is the basis for the stylized realities seen in shows like Batman: The Animated Series (and Bruce Timm's other DC Animated Universe shows) as well as the steampunk genre. From the Wikipedia article:

Retrofuturism (adjective retrofuturistic or retrofuture) is a movement in the creative arts showing the influence of depictions of the future produced in an earlier era. If futurism is sometimes called a 'science' bent on anticipating what will come, retrofuturism is the remembering of that anticipation.

Screensavers as we know them didn't exist then. I don't recall the character admitting that it was a pun, so I assume that the name comes from the behaviour.

Screenslaver enslaves and ensnares people through the medium of the screen - especially those who are already victims of screen addition. The quote given in Valorum's answer describes this.

The "Screenslaver" name is a pun primarily intended for the (modern) audience, but it does describe the nature of the crime involved.

I was thinking screen enslaver got morphed into screenslaver, as the looking at screens was how folks got hypnotized/enslaved. Not necessarily a screen saver.

You missed the point "screenslaver" isn't necessarily a pun on screensaver it's a pun on consumerism of media and radio in a broader sense.

CRTs were also invented before the 1930s with the first commercially made electronic television sets with cathode-ray tubes were manufactured by Telefunken in Germany in 1934.

If not mistaken is based on the 70s. Yet it does not mean their 70s is the same as our 70s. What do you mean there are no computers. Like they have better technology than we had in the 70s or if you want to say the 50s. There are different monitors in those movies. Is just a kids movie, is does not need to have a coherent time period.

Not the answer you're looking for? Browse other questions tagged incredibles-2 or ask your own question.

30
What time period is "Batman: The Animated Series" set in?