Does Loras Tyrell have a birthmark in the books?

In s05e06 we see that Loras Tyrell apparently has a birthmark.

CERSEI: This testimony is an insult to a great house. Why should The Faith or anyone else take the word of a squire over the heir to Highgarden?

OLYVAR: He has a birthmark, your grace. Quite high on his thigh, wine-colored, and roughly the shape of Dorne.

That is a curious distinguishing trait. Does Loras have a similar birthmark in the books? And do we ever see it on the show?

The birthmark is seen in Season 5 Episode 1, "The Wars to Come", when Olyvar remarks on its shape looking like Dorne.

Loras: No it doesn’t.

Olyvar: It does. That’s the Sunspear bit right there. And that’s where the mountains are. And over here is… Sunsnake? Stonespear?

Game of Thrones, Season 5 Episode 1, "The Wars to Come" 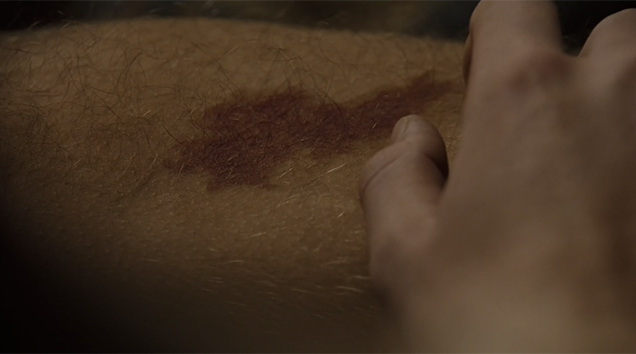 It's also worth noting that the birthmark is actually roughly in the shape of Dorne, as you can see in the comparison image below. 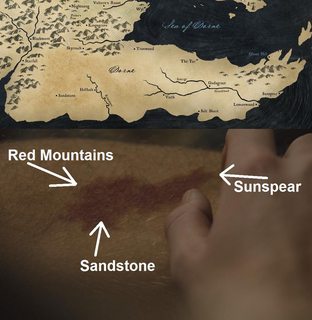 The birthmark is then used at Loras' trial to "prove" that he did have relations with Olyvar as seen in the quote you mention in the question. However, one could argue that as Loras' squire, Olyvar would have seen the birthmark on various occasions. It's likely that it was actually Loras' reaction that got him arrested.

In the books as far as I can tell Loras does not have a birthmark, in fact he reportedly dies before he would even have a trial or the Faith Militant has properly seized control (if they do in the books).

She asked about Ser Loras too. At last report the Knight of Flowers had been dying on Dragonstone of wounds received whilst taking the castle.

A Dance with Dragons, Cersei I

As the birthmark was created for a plot point so Olyvar would have evidence that he and Loras had "relations" it seems most likely it was a show invention just for this plot point.

18
Is Mace Tyrell "The Lord Oaf of High Garden" in the books?
6
Do fighters in the Game Of Thrones books not wear helmets?
19
Does Randyll Tarly hate the wildlings in the books?
6
Why did Cersei ask for Ser Balman's help?
8
Why didn't anyone notice that stocks of Wildfire were very low?
9
How did Renly expect Robert to set aside Cersei and take Margaery as queen instead?
66
Is the Iron Throne in the show faithful to the books?
12
Does Jaime Lannister have dyslexia in the books?