Where were Frodo and Sam captured by Faramir?

Frodo, Sam, and Gollum are on their way to Mordor when they are captured by Faramir's company. Before releasing them, Faramir takes them to Osgiliath.

In "movie time", the journey to Osgiliath seems instantaneous. However, they probably traveled a distance that the movie just didn't show.

Where exactly were they when they were captured?

Is there a name (or rough location) for the cliff where they watched the Oliphaunts?

Roughly, about ten miles upstream from the waterfall at Henneth Annûn.

A slight correction to your assumptions: There is no cliff from which Sam watches the (single) Oliphaunt. Instead, Sam climbs a tree and watches the Rangers' fight with the Haradrim, including the Mûmak, from there. This was one of the bay trees "close by" the bed of fern "a little way back above" the "small clear lake in a shallow dell" where Frodo and Sam made camp, and where Sam made the cookfire whose smoke was spotted by Faramir and his men. This was "less than ten miles" from Henneth Annûn where Faramir marched them to for the night.

In The Atlas of Middle-Earth, it's a little easier to see this on the detail map of Henneth Annûn than the overview map of Sam and Frodo's path. It's labeled "burned circle". Karen Wynn Fonstad is correct in placing Henneth Annûn downstream from the pool: They come to a gorge which "was the same stream that trickled far above out of the round pool". After which they are blindfolded and follow the river to the refuge.

However, KWF's depiction of this stretch of stream as straight is a simplification caused by insufficient information. Faramir leads Frodo and Sam through thick woods, so the stream and the gorge it drops into might follow a more crooked path than that.

(All quotes come from the chapters "Of Herbs and Stewed Rabbit" and "The Window on the West" from Book IV of The Two Towers, but they are too fragmentary so I'm foregiong the traditional blockquote and hand-drawn red circle. We can piece the rough location together out of the quotes).

In the book The Two Towers, Faramir does not "capture" the hobbits and certainly does not force them to travel with him. However, he does meet them and convey them to the a hidden Gondorian sanctuary where they can rest. No name is given in the book for the location where Faramir's men first locate the travelers, nor to the nearby location where the rangers of Ithilien defeat the men and elephants coming from Harad.

Nor is there any location name given in The Atlas of Middle Earth by Karen Wynn Fonstad. The Atlas of Middle Earth is a painstaking effort to produce a set of maps consistent with Tolkien's vision of Middle Earth; it is intended to be used as a reading companion for the books. Had there been a place name for the spot where the men and hobbits met on March 7, Fonstad almost certainly would have included it on at least one of the maps that cover that part of the story. However, there is no place name on any of them. Take, for instance, this map showing the dates of Frodo's and Sam's travel through the realms of Ithilien and Mordor. 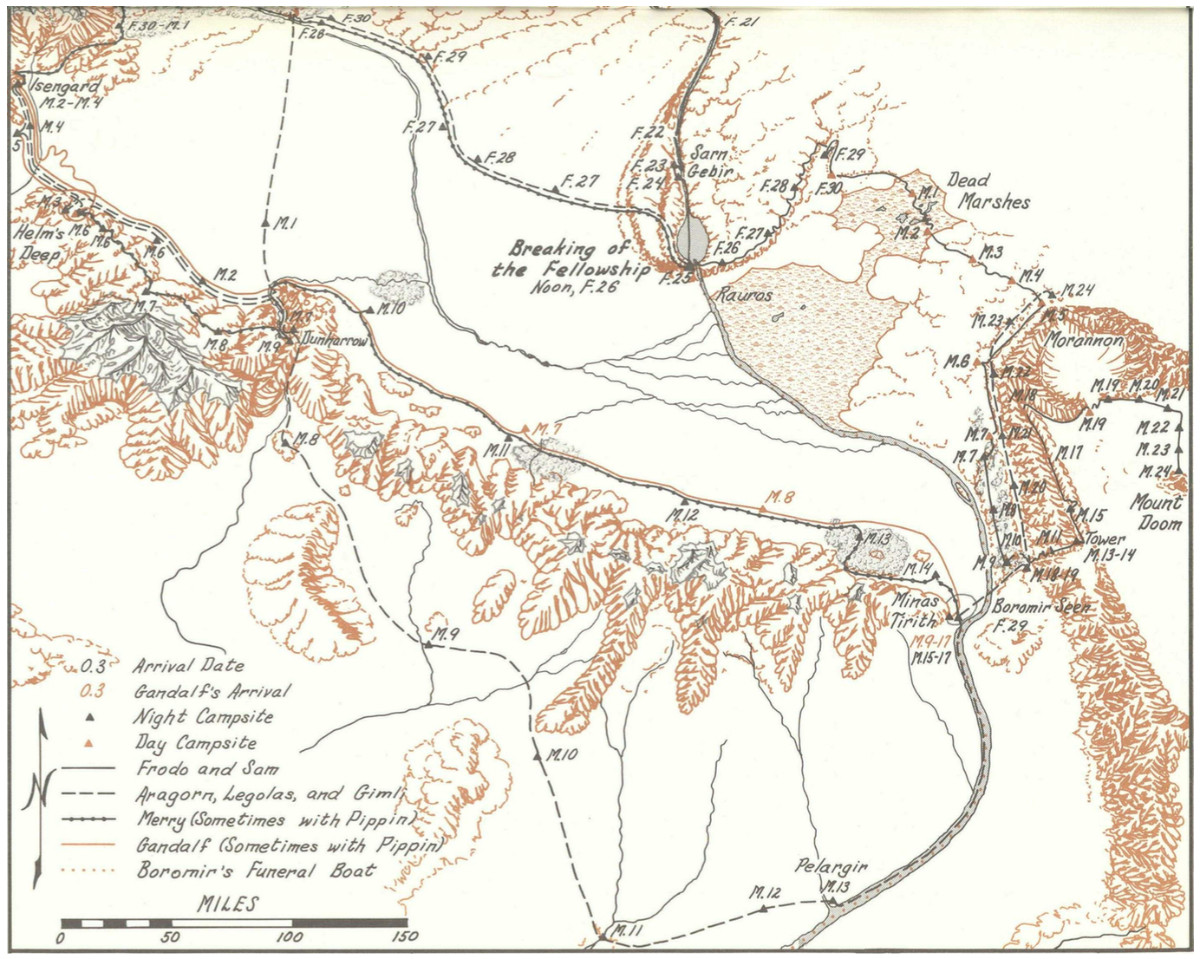 Another map from the Atlas shows the name and location of the hidden shelter of Henneth Annûn, but again there is no name for where the skirmish took place.

31
When and where did Gollum start following the Fellowship?
15
Why did Frodo travel with the elves who were leaving Middle Earth?
20
Why didn't Gollum kill Frodo and Sam?
16
Are the events at the end of the Two Towers film consistent with the film's internal plot?
3
Was there a significant difference between Gollum and Smeagol by the time of Lord of the Rings?
6
When do Merry and Pippin find out that Frodo & Sam have gone to Mordor?
8
Which route had Gollum wanted Sam and Frodo to follow and why?
3
In The Two Towers film, how did Faramir's group cross over to West Osgiliath?
25
How did Gollum know Sauron was gathering the Haradrim to make war?
48
What did Frodo and Sam eat when they crossed Mordor on foot?