Trying to remember a series of books that were ostensibly fantasy, but the population of the world had been marooned after a space colonization attempt. Magic worked through a mist called The Fey, which made thoughts into reality.

No complex machines, as the users' fears they would fail dangerously would make the failure a reality. So lots of sword and sorcery. Main character was a Dracula type vampire immortal, and super powerful adept at manipulating the Fey.

This is the Coldfire Trilogy by C.S. Friedman

The main events of the Trilogy take place on the fictional planet of Erna, colonized 1200 years before the start of the books by a group of humans from a future Earth.

Erna is a primarily hospitable environment; although a planet with severe and intense seismic activity, the planet is similar enough to Earth to allow for habitability.

It has, however, another key difference from Earth. The entire surface of Erna is wrapped in a powerful energy field known as the Fae. The Fae is a type of energy that comes up to the surface from the core of the planet via the plethora of volcanoes and earthquakes that rock the planet's surface. This is an energy that the native animals of Erna sense, and utilize to a small extent to help them survive (i.e. the Fae is often able to tell a Sensitive individual when an earthquake is coming, or if the tides are about to shift). This energy field that encompasses the planet is likened to Earth's magnetic field. Author C.S. Friedman explains how her idea of the Fae was shaped by Isaac Asimov's essay arguing that if magic existed, it would be a natural force governed by consistent rules. "Like fire, it should be useful when controlled, dangerous if uncontrolled," she says. "The fact that we build windmills does not mean we stop fearing hurricanes."

The energy is also sensitive to the human psyche, as the colonists discovered to their dismay. The Fae reacts to human cerebral activity, bringing to life dreams and manifesting fears. In fact, many of the first colonists were killed by Fae-constructs, demons and beasts that fed off of their human progenitors, both physically and mentally. It was only by a Great Sacrifice, the loss of all the technology and knowledge the colonists had brought with them, that humanity came to terms with the Fae, at least enough to learn a rudimentary level of control over the power.

For a few hundred years, humanity has managed to eke out a scant existence on the harsh surface of Erna, keeping an uneasy balance with the Fae. Mankind grows weary of its tumultuous battle with the energy-force however, and multiple organizations try to find ways to render the human psyche unable to mold the Fae. One of these groups was the Church of Human Unification, an organization that sought to bring mankind together in prayer to accomplish two things: 1) make the Fae recognize man as a regular race on Erna, allowing them to live in harmony with the energy, and 2) allow for a human afterlife by bringing mankind to the bosom of a God that either already exists, or will be made by the power of the faith of man, and the Fae it will mold. This Church eventually brought forth a man who would be their salvation and damnation, their Prophet, one Gerald Tarrant.

This sounds like the Coldfire Trilogy by C.S. Friedman. The first book is Black Sun Rising. 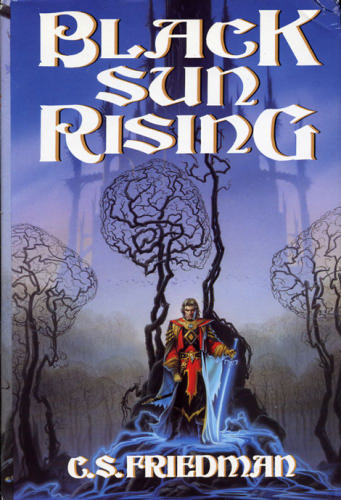 Earth colonists landed on Erna about 1200 years before the setting of the stories. The planet's innate energy field, called "the Fae" reacts to thought, and can cause people's fears to manifest; it cost the first colonists all of their technology and most of their knowledge.

The immortal individual is probably Gerald Tarrant, Neocount of Merentha, who sacrificed his humanity by murdering his family in order to be able to control the Fae. Tarrant isn't really a vampire in that he doesn't feed on blood, and he doesn't need to drain humans to live. He normally sustains himself on the Fae, but when greatly weakened he can feed on the memories, fears, dreams, etc. of humans. (He does this unintentionally when he is first met, and then by arrangement later in order to remain with the others.)

8
Fantasy novel about a medieval society formed by the descendants of human colonists, on a planet that brings their nightmares to life
10
Identifying a fantasy/scifi series/book about abandoned colony/world
7
planet with distortion in probability
3
Sci-fi stories involving a magical element called Fae that would alter reality

12
Fantasy book where people are born with a magical talent
7
Fantasy / Sci-Fi book featuring humans stranded on planet which degrades metal
8
Fantasy book where a sword is imbued with rune magic
7
Book about a world where magic was enabled by nano tech
9
Sci-fi/Fantasy book about bear postman on a planet of bears
2
Sci-Fi book implant tech allows virtual experience of computers
5
Teen fantasy book series about a world where people who showed creativity could learn magic, and were killed for it