Why was New Asgard established at this place?

In Avengers: Endgame it is shown that New Asgard is established in Tønsberg, Norway. What is the reason that they chose this particular place for building their land to live? Does this place have any specific importance or is it due to some Asgardian History? 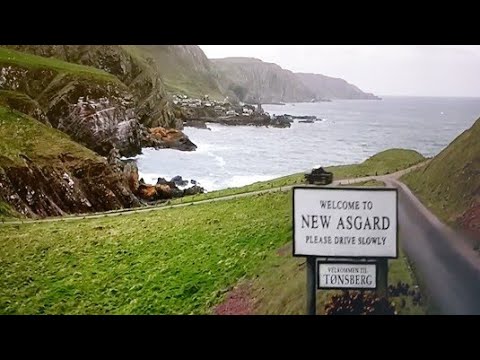 marvel marvel-cinematic-universe avengers-endgame
Share
Improve this question
edited May 27 '20 at 12:37

In the MCU Tønsberg is the place where the Frost Giants arrived trying to conquer Midgard as we are shown in Thor. The Tesseract was then kept here and made safe by people who worshipped Odin/Asgardians as gods and kept it away until Red Skull recovers it in Captain America: The First Avenger. So there is some history to the place with the Asgardians.

However, this was probably not the reason why Thor would have chosen the place. In Thor: Ragnarok Odin is in Norway when they find him and I think we can safely guess it is meant to be Tønsberg . Odin then says the following about it.

Odin: Look at this place. It's beautiful.

According to the wiki, based on the first Thor movie:

Centuries ago, the Frost Giants of Jotunheim, led by their king Laufey, arrived to Tønsberg, planning to conquer Midgard, freezing everything in their path using the Casket of Ancient Winters to plunge the world in a new glacial period.

However, the Asgardian army, led by King Odin, defended Midgard and engaged in a war against the Frost Giants, forcing them to abandon Earth and retreat to their own world.

Around this time, the Tesseract was lost on Earth and made its way to Tønsberg, where it was kept safe for centuries by a sect of Odin worshippers.

The trivia section also claims that "Tønsberg is regarded as the oldest town in Norway", which is also mentioned in its Wikipedia article. It also mentions that there was a concentration camp built nearby during WW2, which would make it sensible for Red Skull to be able to go there then and for there to be fighting going on.

21
What is the fate of the Asgardians at the start of Avengers: Infinity War?

11
Where does Captain America live?
27
Is Thor more than an Asgardian?
8
Did the UN Council have to approve Iron Man's actions in Spider-Man: Homecoming?
21
What is the meaning of Triquetra symbol on Mjolnir?
9
Did Avengers: Infinity War ignore the locations/distances set in Guardians of the Galaxy?
3
Does Vision have Computer/Machine type abilities?
34
Why do these characters still seem to be the same age after the events of Endgame?
11
Are the senior Kree wearing make-up?