Short story on time travel where, at the end, a primitive follows them back to the present but gets scared of a delivery truck and jumps back through the device.

Two scientists create a time machine, looks like a metal ring standing on edge like a Stargate. In operation it looks like it is a circular rainbow. One scientist tries it, but fails to return. Each scientist has a son who is a teenager, both beg the remaining scientist to let them go back in time to rescue the lost scientist.

They find the scientist back in dinosaur times. Unfortunately a brontosaurus trips over the rainbow ring and causes damage. The scientist in the present sends a letter back through time saying the time machine was damaged, they are frantically repairing it, and they will have to bring everybody back to the present in million-year stages. They can't bring them home in one big jump.

At the next to last time jump, they are in caveman era. They are befriended by a local tribe, particularly by a little caveman girl. When they make the jump to the present, they discover that the girl followed them through the rainbow ring. They take her outside to go to one of the houses, but a delivery truck with its light on scares the girl. She runs back inside, where the scientists are testing the time machine, dives through the rainbow ring, and is returned to her home time. 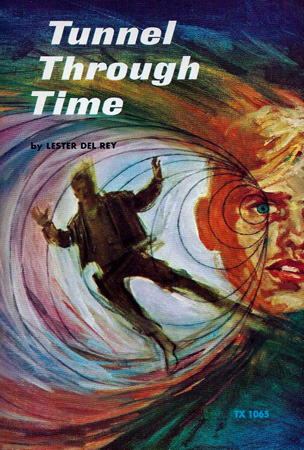