I'm looking for a book where in the second part the hero gets kidnapped by a member of a paincult. He regularly gets tortured but even falls in love with the woman torturing him with a kind of pain stick. In the end she dies but he returns to his female friend to finish the quest.

Another part is that a person is looking for information and buries a child which he befriends. In the end he uses molten lead? to pour into the child so he can read the results (as one might do with tea leaves in a cup)...

I read this book about 10 to 15 years ago. Can't remember anything more than that in the end he has to do something incredibly painful and he is glad for the pain training he had because that's the only reason he's able to manage...

It sounds like you are describing the first book of Terry Goodkind's The Sword of Truth series, Wizard's First Rule. 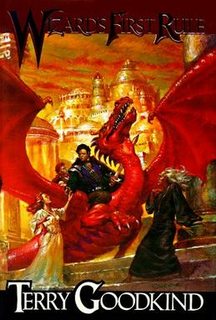 In the book, the antagonist, Darken Rahl, uses an extreme form of molybdomancy early in Chapter 24 (found online with a Google Books search):

While Carl did as he was told, Rahl chanted the last charm, his heart pounding. The torches hissed and spit while they burned, the sound intertwining with that of the spell.

And then he poured the contents of the crucible into the horn.

Carl's eyes snapped wide, and he both inhaled and swallowed involuntarily when the molten lead hit him, searing into his body.

The Wikipedia summary for the rest

Soon an artist who can control enchantments, separates Richard from the group and he falls into the hands of a Mord-Sith named Denna who brutally tortures him for a month. The Mord Sith report to Darken Rahl, and Rahl hopes to force Richard to recite the Book of Counted Shadows, a magical book which Richard had memorized under the bequest of his father. However, Richard's innate gentleness alters their relationship, and Richard eventually breaks free of Denna's control by turning the Sword of Truth white, with the power of love for her, rather than the sword's typical harness of anger.

The entry for Denna has more information:

Denna falls in love with Richard, due to his insistence on showing her compassion despite the way she treated him. She eventually asks him to kill her to free both himself from Darken Rahl's clutches and herself from her role as a Mord-Sith. She gives Richard her agiel as a token of her love right before he kills her.

This sounds like The Sword of Truth books by Terry Goodkind. The stick is an Agiel, used by a Mord Sith.Wikipedia Page.

7
Trying to identify a high fantasy movie on the SyFy channel, two women accidentally bewitch men?
3
Book series about a war between magic users and other people with a sport like football meets death
-1
Poisoned King in a wasteland, needs 3-part antidote

26
What is the name of the story where a guy goes to an alien planet to test a disintegration gun?
23
Looking for two stories about a telekinetic boy
15
Short story about a psychologist with a punishment/reward machine learning you need punishment to reform malcontents
6
Book about a tongueless teenager who might be an alien
11
SF Book: Alien learns to love smell of roses and human suffering
34
Lost title of a book with an old man advertising for a seat available on his rocket ship
6
Book series - Boy finds gem and is transported to a fantasy world