What is the significance of towers in Lord of the Rings?

Leaving aside Minas Tirith and Minas Morgul which have towers as part of their overall structure, there are two very important towers, sometimes called the titular towers of the second book of the trilogy, which are clearly symbolically very important, namely Orthanc and Barad-dûr (Saruman's and Sauron's places, respectively).

But why? Towers are designed to guard and to spy, and both towers seem poorly suited to these purposes. Neither tower is part of a fortification, they are isolated, in the centre of their respective power's territory.

Are they to spy? Again, a tower that is designed to spy is typically built at the edge of a territory controlled by a power, or at the very least on high ground. Both towers are surrounded by mountains in the books (Saruman at least has a decent view in the films).

These towers are clearly not designed merely to protect their occupants and form a seat of power, for otherwise a dungeon or castle would serve better. Clearly Tolkien's choice of tower for these villains is very important, but it is not jumping out at me why.

We ought to look carefully at how Tolkien used the word tower in The Lord of the Rings. The oldest and primary sense of the word is (per the Oxford English Dictionary),

with this meaning stretching back to Old English. However, Tolkien uses the word tower fairly consistently in a secondary sense. The second OED definition is:

The towers of Minas Anor/Tirith, Minas Ithil/Morgul, and Barad-dûr are certainly towers in the bolded sense; they are city-sized fortresses with prominent towers at their centers.

With regard to Orthanc, the full nature of the structure is less clear. Orthanc is certainly not a city-sized edifice like the Tower of Guard or the Dark Tower. However, it is not clear from the descriptions of the structure whether there was a significant ground-level fortress attached to the pinnacle. An early concept drawing by Tolkien showed Orthanc as quite castle like: 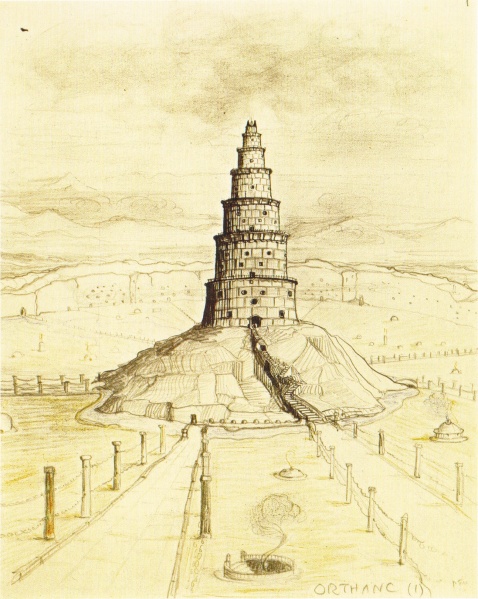 Tolkien provided another, less castle-like, version of the structure later on, 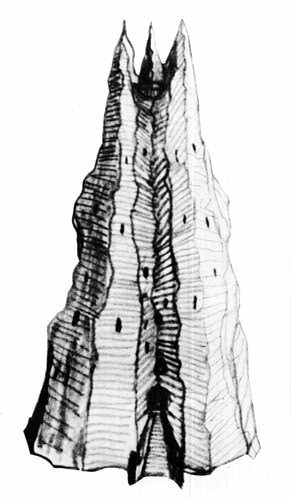 However, this version is still not as starkly vertical as most depictions of Orthanc (by Alan Lee, etc.)

This suggests that Tolkien conceived of Orthanc as definitely a practical fortress, in addition to having/being a tower.

And for another "towered fortress" interpretation of Orthanc, see this image from the book Realms of Fantasy. 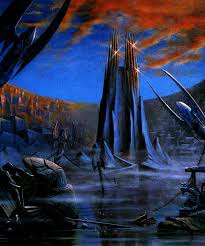 I would only add some additional remarks to the existing excellent answers.

As you say, towers are designed to guard and to spy. That doesn't mean that they are only useful as part of a fortified wall (like the Towers of the Teeth that guard the Black Gate), or to spy on a land from the border (like the tower of Cirith Ungol that was built to spy on Mordor).

Towers are strong defensive structures that can protect those inside. There are plenty of examples in our world of stand-alone castles from medieval times. Their height makes it easy for defenders to see attackers in good time and allows them to throw things (rocks, boiling oil, insults) on anyone attempting to break in.

I believe that it likely has something to do with the use of the palantirs - most of these towers had a palantir inside them at one point.

84
Which are the Two Towers in The Lord of the Rings?

22
Does Frodo believe he can challenge Sauron?
35
Why did they take a Palantir with them when they left on the last ship going west to the Undying Lands?
84
Which are the Two Towers in The Lord of the Rings?
108
Which seven kings does Saruman think Gandalf wants to control?
61
Why didn't Gandalf know what the Palantir was?
12
Did names have any special significance in Lord of the Rings?
81
What was the tallest structure built in Middle-earth?
12
Why did Gondor build the tower, Cirith Ungol, near Shelob's lair?
15
The different names of Mordor