Why don't Terminators have perfect aim?

In the movies Terminators are shown to have extremely advanced image processing. They can do facial recognition from far distances and calculate a lot of environmental data. In Terminator 2, it shows what Arnold himself would be seeing and it was a red screen with a targeting system that was easily able to identify things like this: 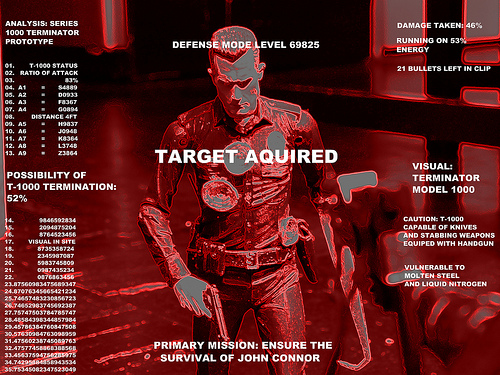 So with the Terminator's advanced machinery and computational ability, why could they not have perfect aim? Wouldn't it be trivial to detect stuff such as humidity, gravity, trajectory, distance, angle, etc required for a perfect shot each time? Of course there is the unpredictability and reaction time of the target to move, but for shots of at least <50 yards I would expect >95% accuracy. I do remember one scene where Arnold showed off his accuracy by shooting a guard perfectly in the leg, and he certainly was skilled with a shotgun, but that's it.

Given the technology they possessed, is it really just to make the movie more realistic? Could it be limitations on the weapons themselves?

There are three things that would interfere with "perfect aim".

So perfect aim is essentially impossible. At least in warfare. On the other hand if he participated in the shooting events at the Olympics, it's safe to say he'd walk away with every gold medal they give out.

I am not sure about other terminator models, but as designed by SkyNet, the T800 is incapable of learning. There is a switch on their chip which prevents this. As stated above, they may be capable of performing all of the calculations of a perfect shot using generalized parameters, such as a constant bullet weight, the shape of the bullet itself, each bullet having the same amount of black powder, the barometric pressure and humidity at Sea Level, ambient air temperature, wind vector, the rotation of the Earth (yes that does have an effect!), the weight distribution of the weapon, etc. However, if anything changes, even the characteristics of the Terminator it will affect the shot. It is incapable of learning how to adjust for those changes and improve upon the accuracy of the shot.

Terminators most likely run on a heuristic basis; that is some 'algorithm of logic' takes place that allows the terminator to aim and shoot at the target at the right time in the right way. Not only are we talking about mechanical accuracy, but also where to aim and when to shoot which are judgement calls, so to speak, and can't be gotten 100% right all of the time.

Now I can't find any evidence to back this up, but from what I've seen of the films and have learnt of heuristics this seems likely.

While the Terminator is a machine and you would think a perfect killer, there are considerations to take into factor.

Shadowboxes -For those of us that are rather ardent shooters, we know shadowboxes to be vice-like contraptions that will hold a rifle perfectly still for zeroing (or obtaining sight accruacy to the shooter's eyeball for those of the layman quantity). Despite a rifle that is vice clamped to perfect stillness, you will not get one bullet to hit on top another; if it happens, it is merely conditions, not rules. Every weapon has a Minute of Angle, which is a fraction of a degree over distance that a bullet will ultimately veer. Everything from the best rifle to the crappiest Derringer has this. No matter what, there is a degree of variance.

Is it needed? - We humans are rather squishy and fragile. It could be that Skynet opted for something else than high-end calibration software/hardware and auto-targeting parimeters to aid in killing a species where a general double-tap in a region the size of the back of a chair will do. A computer might have opted to put more useful information in the T-101's and 800 series; like infiltration and adaptability software. Seriously, a Terminator only really needs guns for volume and effect; it could easily kill a solo opponent unless opponent is exceptionally well-armed and has the advantage of 'the drop' or the element of surprise. Even then, it might be chancey.

Is it possible? - 'Perfect Aim' is quite a feat, and would require some high-skilled machining for servos, dampeners, compensators, springs/shocks, and hand/eye computations. We can do it naturally; machines have proven to be a little more difficult because of the depth problem. For us, it is real, while for a machine it is still digital images. Range would just be a number, and though it might understand bulletdrop, a thing without feeling might not understand pull trigger faster, about to die! or crap, he has a bulldozer! To me, a machine that does not fear would need to 'elevate' itself to be better. Something that I think matches better with the Borg since they were once organic beings.

In addition to the previous answers about the difficulty presented by ever changing target motion and environmental conditions (even a Terminator with stereoscopic vision cannot be expected to perfectly estimate distance 100% of the time), it would take time for the Terminator to "learn" its gun. No firearm shoots true to its sights at every distance due to the parabolic arc of the bullet. Therefore, the Terminator has to determine at what distance the weapon is sighted-in, and then account for an unknown ammunition's performance at different ranges. Both elevation and windage will be different due to the yaw of a spinning bullet and the effects of gravity. Guns are sighted-in to arc rounds upwards to varying degrees. This is all assuming the weapon in question is sighted-in properly in the first place, which is not as easy as it sounds. Because of the inherent inaccuracy common to any firearm, they must be "patterned" and an approximate point of aim determined from the grouping of hits.

Adding to that, the Terminators do not seem to use the sighting mechanisms of their firearms much in the movies, so they are aiming via proprioception: the intrinsic knowledge of how one's body is positioned. This is also a guessing game, because as mentioned in other answers, the Terminators take heavy damage throughout the films and cannot be expected to have their servo mechanisms maintain calibration throughout.

Tinfoil: they were never meant to succeed at assassination.

As to why this might be the case - have you ever wondered:

Tinfoil answer is: Skynet sends both assassination and rescue parties, both events result in him being never created. Billions of people never die in the nuclear fires and ensueing calamities, John Connor saves them all but not in the future. Skynet gets to appologize and a sentimental closure : "I know now why you cry, but it's something I can never do." And he dies content that at least two people in the universe know that he has existed despite the fact that he effectively erased himself from the timeline.

Assuming you are talking about moving targets and moreover unpredictably moving targets, I would suggest the fact that it is a machine retards its ability to generate a perfect shot, regardless of its ability to calculate the perfect aim. As powerful as the Terminator is in its ability to process the world around it, and take into account all of the factors programmed into it, it is still only as capable as the technology applied, and is no match to the processing power of the human mind and its ability to make the extra adjustments necessary to complete a 'perfect shot'. Intuition, historical trend, weapon adaptation, first-hand experience with the physics of the world would be just a few examples of this. As stated in another answer, there is no indication that the Terminator is capable of learning, and as such we can presume it is unable to apply historical data to augment its built-in systems.

With all of that said, I would agree that a Terminator should still be more accurate at close range than the movies project in some instances, since all of the adjusting factors I've mentioned would eventually be negated by shear reaction time.

28
In T2 did the Arnie Terminator make a huge mistake in shattering the frozen T-1000?