Old sci-fi story: radiation mutated the animals, a boy loses a limb, but it's okay because “humans used to do great with only two arms”

The story deals with a father and son at a zoo, and the father describing how radiation has mutated the animals over the years. Towards the end of the story, the boy gets attacked and loses an arm. When the father asks the doctor if his son will be okay the reply is that he'll be fine humans did great with only two arms.

I think it was probably in an Alfred Hitchcock anthology but I'm not sure. I checked it out from the school library.

On a side note, I found someone else asking about the story on another site in 2012, but they never got a response.

I think that's "Zoo 2000" by Richard Curtis. From the anthology of the same name edited by Jane Yolen.

'There isn't much that can be said on occasions like this. But, well, it isn't the end of the world. Many people live with the loss of a hand, and of course there are excellent rehabilitation programs."
"Yes," said Mr. Barber bleakly, not really believing it.
"Also it may be of some small consolation to realize the boy still has three good hands left. We tend to forget that for a million years or so, man had to make do with only two. So Steven is still one hand ahead of the game."
"I suppose so," Mr. Barber said. "I guess we have to look at the bright side." "That's the spirit," the doctor said cheerfully. "Now I'll take you down the hall to see your son".

p.s. It wasn't a gorilla that did the grabbing but an angry grizzly bear :-) 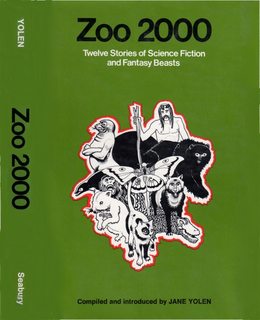 12
Short story identification: A boy visits a futuristic zoo and gets injured by a gorilla